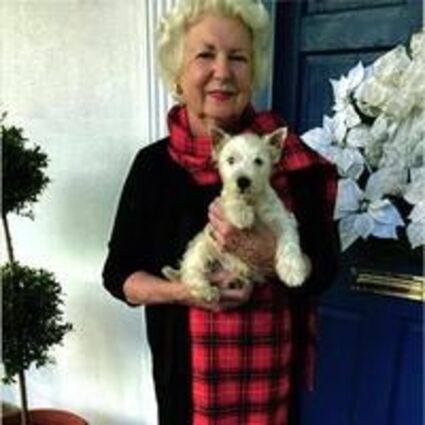 The daughter of Jerry B. Bruce and Lucille R. Bruce of Memphis, Tennessee. Bette attended the University of Alabama and graduated from Southwestern University, now Rhodes College where she was Chi Omega.

After working for Southern Airways in Memphis, she continued her career as a travel consultant which afforded her trips to many countries including a British Airways flight on a Concorde from London to New York

Bette had a brother, Jerry B. Bruce, II of Memphis, who preceded her in death. She is survived by her husband of 52 years, Frederick J. Ryan, Jr .; son, Tracy Barnes (Carol) of Sachse, Texas; three cousins, Diane Hillyer Copley (Richard), Barry Hillyer (Bonnie), and Bruce Hillyer (Adrian) all of Memphis Tennessee; and a nephew, Jerry B. Bruce, III (Selah). She is also survived by her dog, Robbie Ryan, the love of her life.

Bette was a gracious woman who endeared herself to others. She was involved with the Lake Wales Art Council. She was a vocal supporter of the University of Alabama and the New York Yankees for many years, and she loved old movies. Bette and her family enjoyed spending summers at their cabin in Little Switzerland, North Carolina for over 50 years.

A memorial service will be held at the Church of the Good Shepherd at a later date. In lieu of flowers, memorial donations can be made in her honor to the charity of your choice.