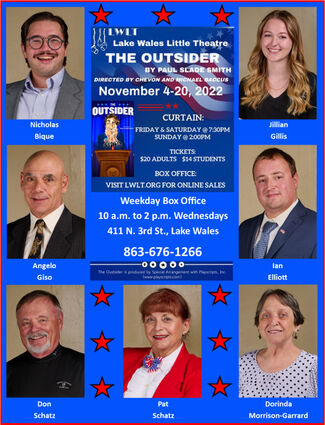 With election season upon us, Lake Wales Little Theatre is presenting a timeless and hilarious comedy that skewers politics and celebrates democracy.

The action takes place in the office of the governor of a small state. In the wake of Gov. Larry Paige's ouster for a scandal involving a beauty pageant contestant, the job is thrust on Lt. Gov. Ned Newley. Newley doesn't even want to be governor. He's terrified of public speaking and his poll numbers are impressively bad. To his ever-supportive Chief of Staff, Ned seems destined to fail. But political consultant Arthur Vance sees things differently: Ned might be the worst candidate to ever run for office. Unless the public is looking for... the worst candidate to ever run for office. A surprise choice for lieutenant governor adds levity to the occasion.

"This play is laugh-out-loud funny and the cast is doing an amazing job," said Mike Baccus. "This is a fun, political romp that keeps the audience engaged and laughing. There's no partisan politics in the play, just a look behind-the-scenes in political campaigns."

The Lake Wales Little Theatre production of "The Outsider" opens Friday, Nov. 4 for a 3-weekend run. The play runs at 7:30 p.m. Fridays and Saturdays and 2 p.m. Sundays at the intimate, 140-seat theater, located at 411 N. 3rd St. in Lake Wales.

"The Outsiders" was written by Paul Slade Smith and produced by special arrangement with Playscripts, Inc.