The Ball Brothers to Appear In Lake Wales November 30 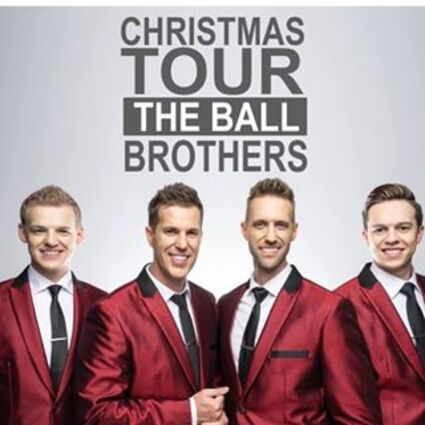 The Ball Brothers' popular brand of four-part harmony is sure to please during their Christmas Tour, coming to First Presbyterian Church November 30.

Fans of Christian music will have a rare treat as the First Presbyterian Church brings the Ball Brothers to Lake Wales for a single free concert on Wednesday, November 30, beginning at 7:00 pm.

The Ball Brothers are a popular Christian entertainment group consisting of two brothers, Andrew and Daniel Ball, along with brother-in-law Chad McCloskey and newcomer Rhett Roberts. According to their website, the group travels world-wide, singing their distinctive brand of Christian music, a mix of musical styles, melted together by tight, four-part harmony. Each song is hand-picked to be message-driven, and theologically sound.

The Ball Brothers "have rapidly made their mark in Christian music by finding a musical balance between the old and the new." Their hit song "It's About the Cross" hit #1 on the iTunes Christian Chart and their video has been viewed over 45 million times.

"We've never been to a place where every person in the audience was the same age," said lead vocalist Daniel Ball. "On the contrary, most places we go have a mixture of young, middle-aged, and older people. So, our music style and song selection is based around that blend. It's great to see a grandmother and granddaughter worshiping together and enjoying the same music. We get to see that on a regular basis."