City Land Use Mapping Process to be Reassessed 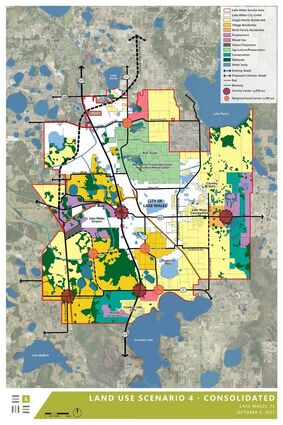 The final compilation map produced by city contractors depicts the future land uses in areas outside the city limits but within the city's "utility service area."

After an October 27 public forum that City Manager James Slaton described as "disorganized," City of Lake Wales staff is reviewing and restarting the entire process of conducting a land use study that will outline future desired uses of property in and around the community.

City staff plans to enhance public engagement in the City's Land Use Study, designed to evaluate land areas in the city's utility service area beyond the city limits in unincorporated Polk County.

"The presentation at the public forum on October 27 was disorganized and less favorable. We'll be working with the consulting firm retained for this project to reconstruct our plans," Slaton said.

City commissioners participated in the forum and witnessed a significant amount of criticism directed at the process and results by the more than 100 citizens who attended the event at the Austin Center. Many were upset with the presentation, which consisted of four maps on easels placed at the front of the room. City Commissioner Terrye Howell, a teacher, became frustrated with the situation, and eventually directed staff to move the easels to different parts of the room so that people could access the maps.

The next step will be "drop back and punt," according to one city staffer, who asked to remain anonymous. An official statement issued by the city said that "part of the new engagement efforts will include another public forum and potential workgroup sessions."

"We'll be giving the citizens more opportunity to engage in the creation of the Land Use Plan," Slaton confirmed.

The city's goal in initiating the Land Use Study is the development of a comprehensive Land Use Plan to identify areas suitable for development. The study guidelines identify the types of development to be considered to include agricultural, residential, commercial, and industrial uses.

"It's essential we be proactive and focus on responsible growth," said the city's Development Services Director Mark Bennett. "I'll be the first to admit that it's not an easy process, but that's what land use planning is all about," he added.

The four maps presented included "conservation, neighborhood, and employment" focus maps, with a fourth map that stacked those concerns to produce a "Comprehensive" map that included "the most compelling parts of each scenario." 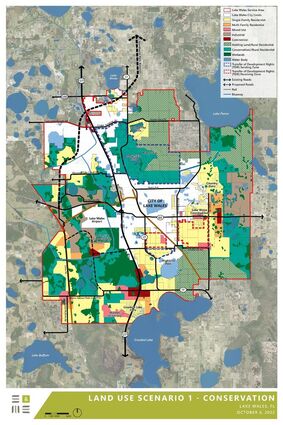 The final plan maps will not be used to replace the state-required Future Land Use Map series covering properties within the city limits, according to Bennett, but may be potentially utilized "as a joint-use guide with the county," Bennett said, as a basis for future utility and transportation infrastructure planning.