Missing Woman May Have Been Murdered, Buried Under Floorboards 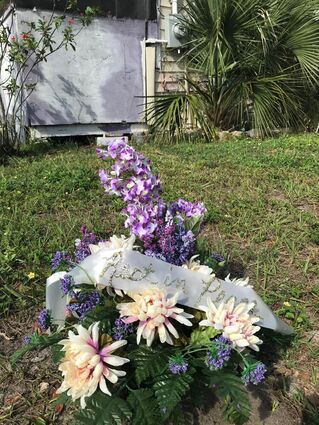 A simple spray of flowers bearing the words "Rest in Peace" mark the yard of a home suspected of concealing the remains of Lake Wales resident Debbie Williams, missing since 1990.

A missing woman, a distressed family, and decades of rumors have led the Lake Wales Police Department to reopen a "cold case" investigation that has many questioning why it's taken so long.

At Tuesday's City Commission meeting, two residents came forward to challenge an official narrative about the case, stating that the family is "still grieving" and needed closure. The issue was raised only days after a private search and rescue team found evidence that a murder victim likely remains under the floor-boards of a Lake Wales home.

Debbie Williams was only 24 years old when she was reported missing by family members who hadn't seen her in several weeks. At the time of her disappearance in March of 1990 she had been living with a man known as "Cicero" Story at an aging frame house at the corner of "A" Street and Dr. James Wiltshire Boulevard in Lake Wales. An investigation was conducted by Lake Wales police at the time which turned up few leads.

Story had met with the law many times, and his activities had led him to jail on more than one occasion, according to police officers who served the area at that time. Former Lake Wales patrol officer Dennis Hathcock recalled that Story's reputation for anger and violence was well-known in the community as well, despite a disability that required him to use a cane.

Both Hathcock and former Police Supervisor Melvin Waldron recall that Story was known to recruit women to prostitution, sometimes using threats of violence. Hathcock shared a story of a witness who, in 2019, reported that she had once seen a young woman tied up and lying in the bathtub of his home.

Williams' daughter Tamesha Williams was only nine years old when her mother disappeared. She was raised by her grandmother, who recently passed away without learning the fate of her own daughter. Williams told LakeWalesNews.net that she had been contacted by City Manager James Slaton this week and that he had assured her that finding the truth about her mother's disappearance was a "top priority" for him. Slaton has served in his position only since November 2020 and was apparently unaware of the police matter.

Williams also spoke to Lake Wales Police Chief Chris Velasquez, who reportedly told her that "we've been working this case" but then admitted that he wasn't even aware that Debbie Williams had a daughter. "That's an insult," Williams said. "I've been living here all my life."

"We never talked about it, I never got therapy," Williams said of her mother's disappearance. "My memories have been suppressed."

Waldron, now 79 and retired, still serves as a part-time aide at Lake Wales Police Department. He maintains a Facebook page called "Johnny Law on the Ridge," where he often shares stories of cold cases. After his retirement he maintained close ties with many of those he describes as the "old timers" who populate the minority-dominated "Northwest Neighborhood." In his casual conversations he often heard recollections of Debbie Williams, some suggesting that Story was involved in the mystery of her disappearance.

Many in the community reportedly believe that Story had killed her, whether intentionally or accidentally, during the heat of an argument, according to Waldron. Among the rumors was a repeated belief that Story, due to his disability, was incapable of moving a body, and had buried the young woman under the loose floor-boards of his bedroom, a place he had been known to hide cash and contraband. Story reportedly died in a nursing home about five years ago.

In 2019, on the basis of the new rumors he had heard, Waldron called a retired Polk Sheriff's deputy to ask for advice, sharing the story of people who recalled the foul smell that was coming from the house at 17 Dr. J.A. Wiltshire Boulevard at the time of Williams disappearance. That deputy immediately reported the question to his supervisors, who sent two homicide investigators to the scene and notified the Lake Wales police of the situation.

LWPD then assigned Detective John Mongeon to meet Waldron at the scene. A young officer was sent crawling under the house to attempt to locate evidence. He returned with a few bones. A photo sent to the medical examiner were described as "animal bones," and the Polk Sheriff's office was dismissed from the case.

Mongeon investigated several leads and interviewed potential witnesses who reportedly shared rumors that Story had killed Williams and buried her under the house. After Mongeon wrote his supplemental report about the case, mentioning the smell and the "bathtub" victim, he was transferred to duties as a school resource officer, and the case was again left in limbo.

Waldron, however, told another retired officer, Dennis Hathcock, that he wasn't satisfied with the results of the investigation. He told Hathcock that a look under the house revealed an obvious mound under the bedroom, but the officer had been sent to a different area. Waldron has maintained a years-long friendship with Hathcock, who now lives in the Ocala area.

Hathcock shares Waldron's skepticism that a thorough investigation had been conducted. Several months ago he arranged an offer of a cadaver dog, which could be brought to the scene from the Alachua County Sheriff's Office, but the offer required a request from Velasquez, which was never made.

A week ago, Hathcock arranged for a site visit from the Peace River K9 Search and Rescue team (PRSAR) of Englewood, Florida. The non-profit organization conducts searches for human remains around the globe, often volunteering after earthquakes, structure collapses, and other disasters using certified methodology.

A team headed by Julie Starbuck and Michael Hadsell arrived at the scene early on Thursday, October 27, bringing a pair of dogs trained and certified to identify human remains. They also brought a set of tools including a device which measures the "piezoelectric signature" of organic material and the "familial resonance signature" to match a sample provided by Tamesha Williams. Both Hathcock and Waldron were present during the investigation.

According to the PRSAR report, a "soil sample was tested for aldehydes, using Shiff's Reagent, which reacts to a light to dark pink color" when aldehydes are present. The substance may result from either animal or human remains in the soil. After the two tests performed reacted positively, both dogs alerted to remains.

After the positive results, Waldron called Lake Wales police, expecting a detective to report to the scene. The report from PRSAR states that at 11:00 Chief Velasquez and Lieutenant Nick Crosby arrived at the scene without a detective. According to witnesses who spoke at Tuesday's city commission meeting, Crosby made threatening gestures and comments toward Waldron, and shortly afterwards Starbuck and Hadsell departed.

On Wednesday the Lake Wales Police Department issued a statement about the case, which reported that they are working the case actively but that "detectives have been left with a single partial page initial report to go on" from the original 1990 investigation. The statement recited the facts from the 2019 investigation but did not mention the events of Thursday or the results of the investigation by PRSAR.

"It wasn't a resource we had reached out to, so that's why" it was not included in the statement, Deputy Police Chief David Black told LakeWalesNews.net. He said that PRSAR has shared their full report with the police department, and it contains information they consider useful.

Black said that the condition of the aging structure, built some 100 years ago, made any digging underneath the home problematic. Semco, an engineering and construction company under a city contract, has been asked to evaluate the structure to determine if it's safe to dig.

Debbie Delores Williams as she appeared shortly before her disappearance in 1990. Rumors of her fate have circulated for many years.

"We want to find her if she's under there, don't get me wrong," Black said. "We just don't want to lose anyone else" in the process. He explained that, if a dig were to be conducted by removing floorboards in the bedroom of the house and nothing was found, the matter would still not be settled. "We're going to have to excavate the entire site," he said, explaining that they are also making arrangements with the owner and a house-mover to relocate the entire structure. As of Thursday, the house had not been secured as a crime scene.

Anyone with information about Williams' disappearance is asked to contact Detective Ricky Hartwell or Sergeant Shawn Smith at the Lake Wales Police Department at 863-678-4223. Heartland Crime Stoppers is now offering a reward up to $5,000 for any information, which leads to locating Debbie Delores Williams.

Anyone with information be wishing to remain anonymous and be eligible for the reward through Heartland Crime Stoppers may also call call 1-800-226 TIPS (8477) or dial **TIPS from a cell phone.