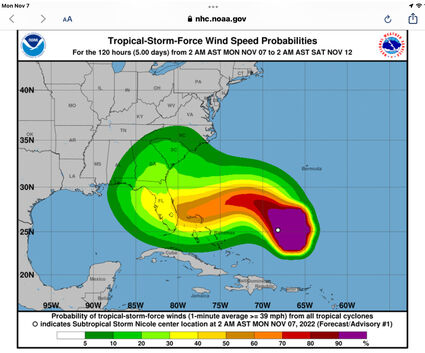 Sub-Tropical Storm Nicole is expected to bring very gusty winds and rain to a broad area, including Lake Wales and environs.

The approach of Storm Nicole has many Lake Wales area residents on edge, but this system is unlikely to be much like what we would normally expect from a hurricane..

As a "sub-tropical" storm Nicole has a much different structure, and the location of the exact center of the system will make little or no difference in regards to impacts. Sub-tropical storms typically lack the intense inner core and eye-wall structure found in hurricanes, instead dispersing their intensity over a much broader area. Upon landfall it will likely not lose intensity as rapidly, either, due to that structure.

As Nicole approaches Florida on Wednesday, the Lake Wales area will receive much the same impacts as the rest of the state. Although we will be spared from the coastal flooding and severe erosion expected along the Atlantic coast as far north as the Carolinas, we are almost certain to receive gusty winds to tropical storm force, along with rain squalls that may leave two to four inches. Widespread power outages are not expected in the Lake Wales area.

While low-lying areas around many area lakes and rivers remain inundated from nearly two feet of rain that fell during the passage of Hurricane Ian a month ago, some upland areas have had little since then.

Residents are urged to plan ahead to avoid travel during the Wednesday through Friday period while winds are expected to remain very gusty.