"The Outsider" Offers Needed Laughs at the Expense of Politics 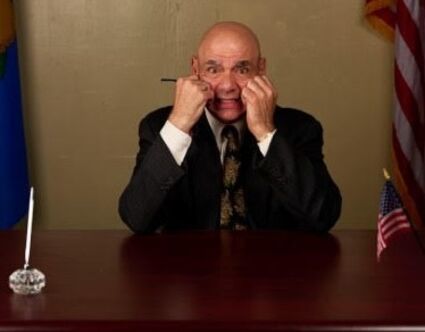 The unprepared and camera-shy policy wonk Ned Newley, played by Angelo Giso, is thrust into the role of governor by the resignation of his boss, triggering a comedy of political shenanigans in "The Outsider," at Lake Wales Little Theatre through November 20.

Lake Wales Little Theatre is offering an entertaining and timely comedic romp through the American political landscape in its production of "The Outsider," which runs through November 20.

What would you do if you were suddenly thrust into public office, and were terrified of crowds and cameras? That's the dilemma facing accidental Governor Ned Newley

While the script provides its appropriate level of laughs, it's the cast that brings the play to life, with solid performances in each character.

Newley, the nerdy former state treasurer and policy wonk, is so nervous he can barely get through his swearing-in ceremony, but help arrives unexpectedly in the appearance of political-consulting superstar Arthur Vance.

Vance, played by veteran actor Nicholas Bique, gives an exuberant performance, strutting about the stage as he spins his scenarios for making the frightened Newley a national political leader.

The straight-guy lieutenant governor and new state leader, played by newcomer Angelo Giso, is thrust into new personas by Vance, who tries to "dumb down" his character to meet the low expectations of voters.

Ian Elliott plays the governors' chief of staff, Dave Riley, who frets incessantly as the events spin around him in a political whirlwind. Left with no staff, he is forced to hire a "temp" named Lulu, played by Pat Schatz, who proves to be a vapid mis-manager of all things official.

When the interview team from Channel 3, Rachel Parsons and A.C. Petersen, played by Jillian Gillis and Don Schatz, arrives on the scene, they are treated to a disastrous interview that ends up with the zany temp Lulu being thrust deep into politics. 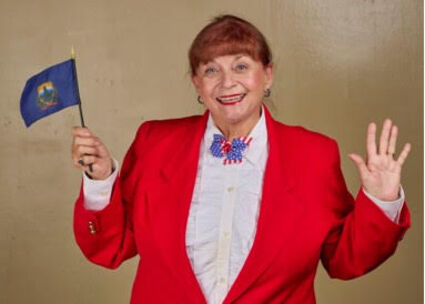 The vacant-headed temp worker Lulu Peakes, played by Pat Schatz, becomes an unlikely political candidate after being hired to help staff the governor's office in "The Outsider," at Lake Wales Little Theatre.

Lake Wales Little Theatre is an intimate playhouse without an obstructed view, located at 411 North Third Street in Lake Wales, adjacent to Bok Academy North and the city gymnasium. The theatre is now in its 45th season of providing entertainment to the Lake Wales community.

The play opens Friday, November 4 for a three-weekend run. Reserved seat tickets are $20 for adults and $14 for those under age 18. They may be selected and reserved online at the Little Theatre website or by visiting the box office on Wednesday between 10:00 am and 2:00 pm.

Full-season tickets are also available. For information, please call 863-676-1266 during those hours.