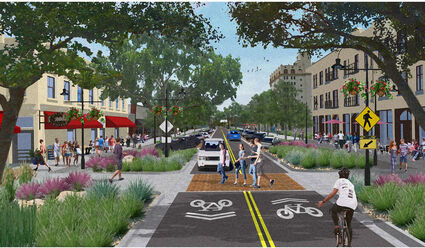 The future Park Avenue will be tree-shaded, pedestrian-friendly, and a reinvigorated commercial district if the hopes of the Lake Wales Connected plan designers and community supporters are achieved. The area has faced a long-term decline in economic activity, and the plan is intended to reverse the trend and make the downtown area a magnet for residents and visitors alike. This view, looking east from Wetmore Street, envisions new buildings which may eventually fill vacant land in that area.

The Lake Wales Connected plan took a major step forward this week as the Lake Wales Community Redevelopment Agency (CRA) voted Tuesday to award a construction contract for the Park Avenue reconstruction. Work on the multi-million dollar project is expected to begin in January.

"This is the showpiece project of the Lake Wales Connected plan," City Manager James Slaton told city commissioners sitting as the CRA board. "It's been at least a couple of years to get to this point."

The Lake Wales Connected plan is an award-winning multi-year urban renewal program designed by the urban planning firm of Dover Kohl and Partners.

In this central effort, a three-block long portion of Park Avenue, reaching from Scenic Highway to Wetmore Street, will be completely rebuilt with clay brick pavers, extensive landscaping, and wide sidewalks to accommodate outdoor dining. Amenities including new benches, signature lighting, and hanging planter boxes will accent the street. It is envisioned as a new pedestrian and event-friendly heart for the city.

Slaton told commissioners that contingency plans were being developed in cooperation with downtown merchants to allow commercial activity to continue during the construction period, which is expected to take some 18 months. The work will commence on the western end of Park Avenue, where fewer businesses will be impacted.

The project will also include the reconstruction of the MarketPlace plaza to include new walking surfaces, grassy lawns and event space. The existing dedicated brick pavers will be relocated during the project. An effort to bury all utility cables in the area has been ongoing for months, but is awaiting action by Comcast to relocate their overhead wires.

"This is an historic day," Slaton added, a comment echoed by CRA Chairman Robin Gibson, who participated in the meeting via a telephone connection from Spain where he is visiting family. Gibson has been a driving force behind efforts to reinvigorate the city's historic core in the face of sprawling development along US 27 and SR 60 in recent decades.

The contract for this phase of the project was awarded to Gomez Construction, who offered a bid of $11,591,834.18. Gomez was one of six "qualified" bidders considered, of eight who responded to the bid offering. The firm maintains offices in Miami and Winter Park, and since 1994 has completed multiple projects across North and South America and the Caribbean, according to their website.

The project is being funded from the proceeds of an $18.5 million bond financed entirely with CRA funds, meaning there is no liability for Lake Wales taxpayers. The funds flow from the "tax increment" generated by rising property values within the CRA district, in excess of the base year valuation.

The CRA is currently generating cash flow of about $2.7 million annually. The project is expected to further raise those values, further increasing CRA revenue. 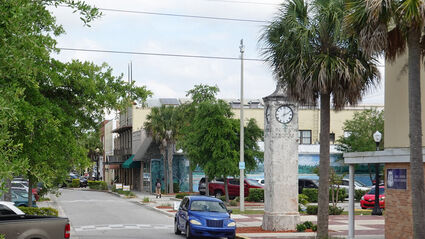 The redevelopment project beginning in January will include the make-over of the MarketPlace plaza with new surfaces and landscaping. It will also include a grassy event lawn that will be reserved for possible future commercial redevelopment.

Much of the remaining bond funds are committed to future Lake Wales Connected projects, including a lengthy stretch of First Street. Designs for that work are still underway, but Slaton indicated that, depending upon the bids received, that effort may be delayed a year "or two."

Slaton told commissioners that the CRA still has excess revenue beyond debt service and operational needs, and that some of those funds may be used toward the First Street project.

Other elements of the Connected plan, including streetscape work on Central, Orange, and Crystal Avenues, is being funded largely with Federal grants. The plan also includes a huge sidewalk construction and street tree planting project in the Northwest Neighborhood.

At the same meeting the CRA board approved an engineering contract for the second phase of the Crystal Lake Park loop trail. The first phase is nearing completion, and a dedication ceremony is planned to take place in coming weeks.