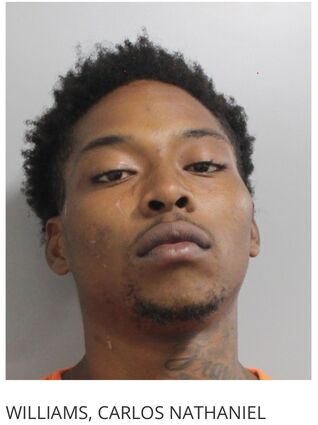 Police are seeking the whereabouts of Carlos Nathan Williams of Winter Haven, who is wanted on multiple felony charges.

An alert Lake Wales Police officer led to the Saturday seizure of illegal and prescription drugs, as well as a large amount of cash.

Officer Terry Schulze was on patrol and noticed a vehicle parked at the Prince of Wales motel which matched one usually driven by 24 year old Carlos Williams of Winter Haven, who is wanted on multiple violent felony crimes. Carlos Williams is . He is wanted for aggravated assault with a deadly weapon and domestic violence charges, and a warrant for his arrest is outstanding.

Officer Schulze spoke with Shanell Mickel, 43, of Lake Wales, a resident of room #5, near where the car was parked. Officer Schulze asked if Carlos Williams was there, and was told that he had recently been there but was not there now. She allowed officers inside her motel room to confirm. While Officer Schulze was inside the motel room, he noticed cocaine on the dresser and night stand along with Xanax.

Schulze did not locate Carlos inside, but requested detectives from the Lake Wales Police Department to respond and obtain a search warrant for the room. That search revealed not only illicit drugs but illegally possessed prescription drugs. Officers and detectives located 171.6 grams of cocaine, 193 Xanax pills weighing 72.6 grams, and 24 Hydrocodone pills weighing 17.7 grams. A scale with cocaine residue, baggies and other miscellaneous paraphernalia were located as well. A total of $4064.00 in cash was also seized during this encounter which was found with the drugs.

Shanell Mickel was charged with Possession of Alprazolam with the intent to sell, trafficking in cocaine over 28 grams, trafficking in Oxycodone greater than 14 grams, and maintaining a structure/conveyance for drug related purposes. Her arrest history includes cocaine possession, resisting arrest, false ID to LEO, and other drug charges.

Carlos Williams remains at large and is considered to be armed and dangerous. His arrest history includes armed robbery with a firearm, drug charges, domestic battery, and possession of a concealed firearm.

Police are asking anyone with information to contact Detective Sarah Sittnick or Officer Terry Schulze at 863-678-4223. Or, if you would like to stay anonymous and be eligible for a CASH REWARD through Heartland Crime Stoppers: