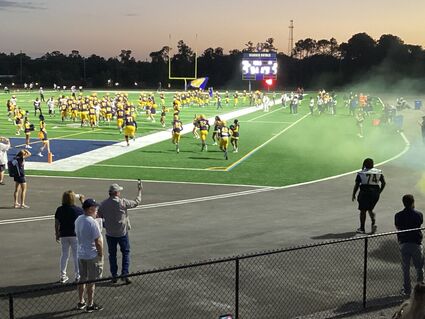 Warner Royals football squad races onto the field on their south Lake Wales campus for the inaugural game on the new facility.

The new facility, although still lacking the bleachers and field house that are expected parts of a college field, has a high-quality playing surface featuring artificial turf emblazoned with the Warner University Lion logo. A press box towers over the west side of the field, allowing coaches, officials, and sportswriters a good view of the action. 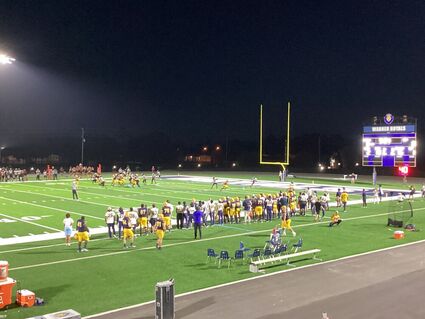 The Royals players, showing no lack of enthusiasm despite struggling through a losing season, raced onto the field before the game with flags flying, and appropriately scored the inaugural touchdown, scoring on a 15-yard pass to the end zone with nine minutes left in the first quarter. Although the heavily-favored Southeastern Fire, 2-2 in conference play and 6-3 overall, eventually won the game, the Royals remained enthusiastic about both the new facility and the future prospects for the growing university.

The new football field is a long-time dream of the university's administration and football program leaders, and will undoubtedly boost the young program, which has shown great ambition in taking on teams classed well above them. Warner University is located along US 27 and has an enrollment of about 830 students.