Auditions This Monday and Tuesday at Lake Wales Theatre 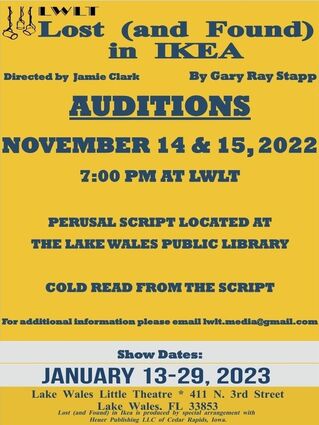 Can two strangers find love at IKEA? Possibly-with a playful ghost involved. We will soon know as a cast of ten actors will perform "Lost (and Found) in Ikea January 13-29 at Lake Wales Little Theatre, 411 North Third Street.

Auditions for the comedy are being held at the theatre this Monday and Tuesday evenings beginning at 7:00 pm. Five women and five men are needed to perform roles both large and small for nine performances. A perusal script is available at Lake Wales Public Library.

Winifred and Lex are both lonely hearts, but neither of them is convinced that true love can be found while shopping. Winifred's brother and Lex's deceased wife think differently and have decided to play cupid for their reluctant loved ones, who unexpectedly find themselves wrestling with love-at-first-sight. Unfortunately, the budding romance is distracted by mayhem of all sorts when a homeless man and a shopaholic ex-con fight over an alarm clock, while a snarky, bitter married couple play a convoluted game of hide-and-seek that eventually leads to several of them literally losing their shirts. Luckily, the store security guard has words of wisdom for all, but even his hands are full when a protest organizer launches into the National Anthem. But when push comes to shove, all is well that ends well when those who are lost in IKEA find love where they least expected it. By Gary Ray Stapp.

Lost (and Found) in Ikea is produced by Special Arrangement with Heuer Publishing, LLC of Cedar Rapids, Iowa.