Building Will Be Used For "Long Term" Housing 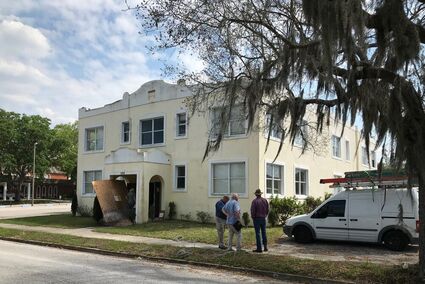 The historic Crystal Lake Apartments will get a new lease on life under an effort by the Lake Wales Care Center. The building currently has eight two-bedroom units, but one of those may be subdivided into a one bedroom unit. Plans also call for the creation of a communal space and a laundry facility.

The historic Crystal Lake will Apartments at 282 East Park Avenue are expected to undergo extensive remodeling and exterior refurbishment after their purchase by the Lake Wales Care Center. The 100-year-old building has been vacant for about three years.

The purchase price was discounted to $340,000, according to Antonio Spagnolo of Bright Trust Realty, in recognition of some damage caused during the passage of Hurricane Ian in September. Both the purchase price and the estimated renovation costs of some $350,000 would be drawn from a $1 million grant awarded to the non-profit from federal Recovery Act funds.

The building had been subject to City of Lake Wales fines and a lien, but a Memorandum of Understanding (MOU) between the city and the Lake Wales Care Center will allow the Care Center to deposit $200,000 into an escrow account to provide relief from a pending foreclosure action on the property. Those funds will eventually be returned to the Care Center as the building work is completed.

The city commission also recently approved a zoning change, allowing the property to be returned to use as apartments, after the long vacancy caused it to revert to the original single-family zoning. To assuage the sensitive issue of additional property within the Community Redevelopment Area being converted to use by the not-for-profit organization, the Care Center has agreed to make PILOT payments in lieu of taxes, which will replace the tax revenue which would be generated by a return to use. The Care Center is currently owner of multiple properties within the downtown area. 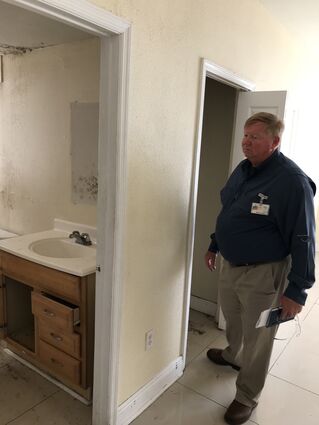 Lake Wales Care Center Executive Director Rob Quam was part of a team that examined the building in March. Several hurdles in the way of the project had to be cleared before the deal was closed last week. Local architects are expected to produce building plans in the near future.

Improving the space around the structure is also on the agenda, according to Care Center Executive Director Rob Quam. It is surrounded by asphalt parking lots belonging to the AR Presbyterian Church, along with a narrow city-owned easement. "We're looking for a three-way agreement" to mitigate the setting and provide for greenspace, Quam said.

"The emphasis continues to be on the fact that these are for people who have graduated from our entry-level program and have personal income, so they will pay a 'program contribution' in lieu of rent," Quam told the News. He indicated that plans remodeling plans include the creation of a common area, laundry, and at lease one singe-bedroom apartment. Quam expects that a large portion of the remodeling will be conducted by teams of volunteers under the direction of a staff project manager.

The property, formerly owned by La Oriental Investment LLC of Orlando, is currently assessed at $112,643. That number will be expected to increase significantly after the sale and renovation. The building last received improvements prior to the 2008 real estate crash, and last sold in 2012.