DRV PNK Stadium is located just off Commercial Boulevard in Fort Lauderdale, between the Florida Turnpike and I-95. Estimated drive time is nearly three and a half hours. Game time is 1:00 pm.

As the Lake Wales Highlanders take on Daytona Beach Mainland in the Class 3S Football Championship, fans have some options for viewing the game, which will be live-streamed on the internet. Those wishing to attend in person also have the opportunity to reserve a seat on a chartered bus.

The 14-0 Highlanders will face the Mainland Buccaneers in a 1:00 pm start on Friday, December 16. The game is being held in the neutral grounds of DRV PNK Stadium in Fort Lauderdale, which seats 18,000 fans. Given its location, remote from both teams' fan bases, it is unlikely to draw more than a few thousand, but distance is not deterring many hard-core followers of the teams.

The Highlanders' defense will be challenged to stop the aggressive passing attack of the Buccaneers, who have racked up 3,227 yards through the air this season, completing 235 of 343 attempts, all but one at the hand of Quarterback Damarcus Creecy.

The Highlanders will counter with a defense that has pulled down 33 interceptions on the year, along with 103 sacks and 56 QB hurries. Creecy is known for throwing deep so the Highlanders defenders will need to be certain Bucs receivers don't get behind them on pass routes.

The Buccaneers are not invincible, having lost three games on the season. The Highlanders potent, balanced offense relies on the passing of Quarterback Trent Grotjan, and the dynamic running attack led by Corey Harris Jr. Depth in both receivers and running back positions has confounded opposing defenses all season.

The game will be televised nationally on the NFHS Network, part of the CBS Sports Digital Network. Lake Wales fans wishing to subscribe to watch the game may choose a one-month subscription by visiting the NFHS website. Unsubscribe after the game to avoid recurring charges. A portion of the fee can be assigned to benefit Lake Wales High School sports programs. 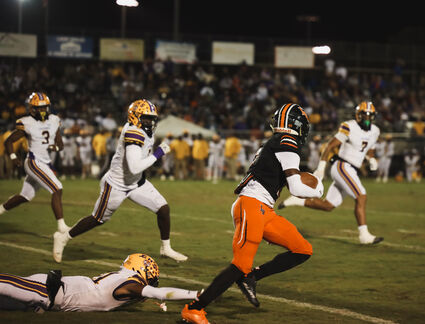 Stopping Corey Harris Jr. and his company of Highlander running backs including Xavier Marlow, Jordan Henderson, Johnquae Richardson, and Quarterback Trent Grotjan will be the challenge for the Mainland Buccaneers of Daytona Beach. Marlow, Carlos Mitchell, Jaremiah Anglin, and Diyante Landrum are potent targets for Grotjan's passes, having racked up 1,997 yards receiving between them.

Those wishing to travel to the game also have options, from driving do to catching one of the remaining seats on a "Fan Bus" chartered by local fan Lora Donley.

The Fan Bus will depart from Lake Wales High School at 7:45 am Friday. Tickets are $45 and include a tailgate lunch prior to kickoff, but do not include admission to the stadium, which must be purchased separately. The Fan Bus will make a stop for dinner on the return trip.

To reserve a seat fans can visit the FAN BUS site by clicking here. There were less than 20 seats available at last count.

Those wishing to make the drive themselves should be prepared for heavy traffic in Ft. Lauderdale upon approach to the stadium, which is located off Commercial Boulevard at 1350 NW 55th Street. That location is about two miles east of the Florida Turnpike, and a short distance west of Interstate 95.

LakeWalesNews.net will report the progress of the game live on our website, and complete details of the contest shortly after its completion.