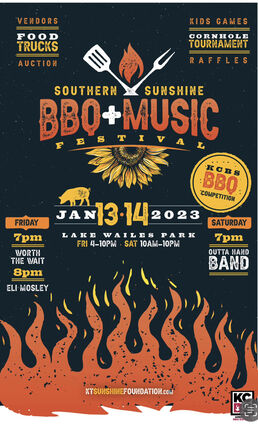 KT's Sunshine Foundation will host the Southern Sunshine BBQ & Music Festival this weekend in Lake Wailes Park, drawing thousands of fans for the fun, and the purpose.

The festival was created in memory of "KT," a nursing student who died in a tragic traffic accident, In its short existence, KT's Sunshine Foundation has awarded $22,000 in scholarships to high school seniors interested in pursuing a medical degree, helped 9 families with funeral expenses, and donated $1,000 to a nonprofit to help prevent veteran suicide. Both the foundation and festival are entirely volunteer-operated, and one hundred percent of the funds raised are awarded annually to the foundation's areas of focus.

The event begins this Friday, January 13, running from 4 pm until 10 pm, and continues on Saturday, January 14 from 10 am to 10 pm on the shores of Lake Wailes Park. Funds raised during the event provide college medical scholarships, cover funeral expenses of families who can't afford to bury their loved ones, and assist in the prevention of veteran suicides.

The festival is free and there is no fee for parking. Festival attendees can support the Foundation's work by making on-site donations and purchasing promotional materials such as hats and t-shirts. There will also be a silent auction and raffles. Many local businesses sponsor the festival. Castle indicated that sponsorships are still available to help underwrite the cost of this year's event, which is being held for the third time.

Babson Park restauranteur Ginny "Chicken" Castle received the phone call that every parent fears, learning that her 22-year old daughter, Kaitlyn "KT" Kinard had been killed by a drunk driver traveling the wrong direction on SR 60 near Vero Beach. A nursing student, KT was months away from graduating with her bachelor's degree from Florida Gulf Coast University.

Just two weeks before her death, KT told her mom that she wanted to do something to help the people of Polk County. "A bright, bubbly ray of sunshine herself," said Castle, "we started KT's Sunshine Foundation just two months later to honor her wishes."

This major fundraising event for KT's Sunshine Foundation will feature a Kansas City Barbeque Society-sanctioned BBQ contest hosting both professional and "backyard" BBQ teams. The festival has a fantastic line up of music both days. . Festival attendees can also enjoy food trucks , vendors, a variety of carnival-type children's games, and a cornhole tournament.