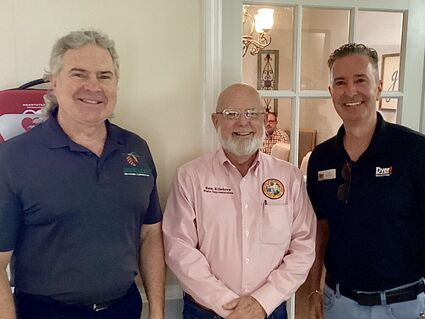 A gathering of community and Chamber of Commerce leadership were present at noon Thursday to mark a new name and new ownership of the former Savannah Court assisted living facility at 12 East Grove Avenue, just off First Street in Lake Wales.

Now under the management and ownership of Innovation Senior Living, the facility will host an increased bed count of 60, up from the 45 residents it formerly served, according to staff. Innovation CEO and founder Pilar Carvajal told LakeWalesNews.net that the company's philosophy includes serving those who struggle to find the housing and assistance they need.

The ribbon cutting at The Club was the official start of new management.

"We will accept Medicaid patients," Carvajal said, indicating that her own mother would not normally be able to afford such a facility based on her limited income. "We make services available."

Innovation owns a number of other facilities around Florida, including an identical one in Haines City, according to Carvajal. She indicated that future plans include expansion into the Gainesville region.

Attending the event and assisting in the ribbon cutting were a number of dignitaries, including State Representative Sam Killebrew, Lake Wales Chamber Chairman David Dlugokecki, and Chamber President/CEO Skip Alford.

The Club will be under the direct management of Senior Executive Director Barbara Berry.