Zany Times as LWLT Cast Gets "Lost (and Found) in Ikea 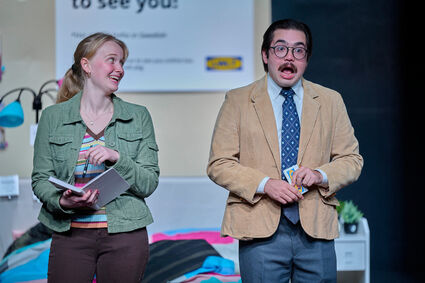 Lexington, played by Nicholas Bique, reacts to a statement by Winifred, played by Julia Brown, during a scene in "Lost (and Found) in Ikea."

Getting lost inside an enormous Ikea store leads to zany discoveries for one young couple and their "ghostly" matchmakers in the latest production from Lake Wales Little Theatre, running now through January 29.

"Lost (and Found) in Ikea" features a charming, budding romance between Winifred, played by Julia Brown, and Lexington, played by Nicholas Bique.

The stumbling flirtation, hindered by repeated but well-meaning intrusions by their invisible accomplices, carries the day amid a host of other characters displaying an array of dysfunctional behavior.

From the stalking Isaiah (played by Angelo Giso) who apparently lives in a bedroom display and makes a living showing people how to escape the cavernous retailer, to Dot, played by Denise Higgenbotham, the compulsive shopper who can't seem to tear herself away from each perceived bargain and is willing to fight to claim her prizes, each sets the stage that seems as suited to the classic "One Flew Over the Cuckoo's Nest."

Maddison Glockner plays Maggie ("don't call her Mags!"), the (late) wife of Lexington who is determined to find a match for her former mate.

Seth Zaradona portrays Stefan, equally determined to push Winifred into a satisfying match in her search for a husband, making her return to the store day after day until she might encounter the right man. 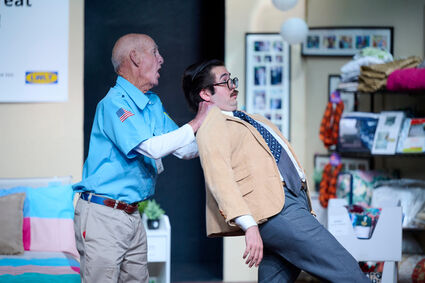 Security guard OZ, played by Tom McCance, gives Lexington just the encouragement he needs to face up to his fears in the comedy play "Lost (and Found) in Ikea" on stage at Lake Wales Little Theatre.

The play runs through January 29 at Lake Wales Little Theatre, an intimate playhouse located at 411 North 3rd Street in Lake Wales. The theatre is in its 45th year of producing plays.

Reserved seating is available on their website at LWLT.org, where patrons can choose their preferred seats from a chart for each performance.

The next performance on the calendar at the theatre will be "Bingo, the Winning Musical," which opens April 14. Auditions for that production are scheduled to take place at the theatre on January 23 and 24 at 7:00 pm. A perusal script is available at Lake Wales Public Library.