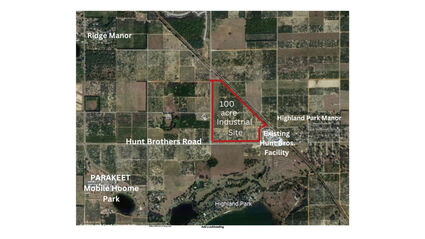 A major new manufacturing plant is proposed for a nearly 100-acre site located south of the Florida Midland Railroad at the intersection of South 11th Street and Hunt Brothers Road.

UPDATE: A proposal to increase the intensity of industrial use on a large tract in Lake Wales to provide for a major plastic pipe factory will be heard at a meeting of the Planning and Zoning board now rescheduled for February 9.

Advanced Drainage Systems has proposed the plant, which would be located on property adjacent to the former Hunt Brothers citrus packing plant. It would occupy a nearly 100-acre site just to the east of South 11th Street and north of Hunt Brothers Road.

According to published reports, Advanced Drainage Systems is the largest maker of high-density polyethylene pipe in the United States, and is headquartered in Hilliard, Ohio. The most recent available data indicates that in 2019 the company manufactured 65% of its pipe from recycled materials.

The entire subject parcel in Lake Wales lies south of the mid-Florida railroad spur, which would be used to ship in raw materials in the form of recycled polyethylene plastic pellets. Those pellets would then be melted and cast to form corrugated pipes typically used for storm-water projects.

Because the finished pipes would be stored in the open rather than inside warehouses, the plant requires a Special Exception Use Permit.

The proposal calls for 20-foot buffers and six-foot-tall walls around the site, with a tree every 50 linear feet. The code also requires 12 trees per acre on the site, or a total of almost 1200 trees.

The project as proposed would employ 65 workers in its primary shift, with three shifts operating the plant 24 hours a day.

The company presently operates in about 41 locations around the United States and Canada, including a facility adjacent to the Sebring airport.

LakeWalesNews.net reached out to the company for comment but has not yet received a response.

According to a city development services staff report also indicates that the plant will use "two entrances...along 11th Street South and a truck access... located along Hunt Brothers Road." 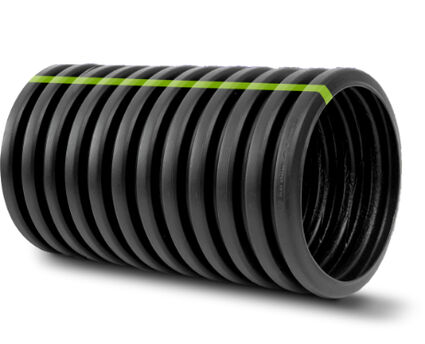 Access permits will be required from Polk County because entrances will be through county-maintained roads.

The staff report states that the facility expects to receive 125 inbound and outbound trailer trips each 24 hour period. However, a further prediction of 65 daily trips from employees is called into question by the projected numbers of arriving and departing employees.

The P&Z meeting to consider the change will be held at the City Administration building beginning at 5:30 Thursday, the same hour as a planned groundbreaking for the Lake Wales Connected Park Avenue rehabilitation project. That event will take place in the MarketPlace and on Park Avenue.

This story will be updated as additional details are learned.

Just the fact that the special P&Z meeting called to vote on this zoning change is scheduled at the same time as the Park Ave. Groundbreaking Ceremony &Street Party should tip off the public that the City is trying to skirt community input on this. The secrecy around a manufacturing plant of this magnitude means we all better get down to that P&Z meeting to voice our concerns about how it might affect our environment, our traffic load, our air quality, etc.