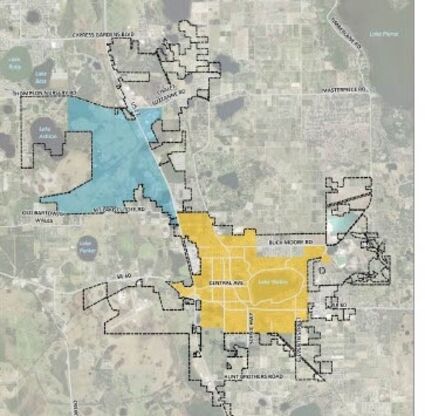 The proposed expansion of the Lake Wales CRA area would nearly double the acreage and balloon future income prospects of the agency. The captured funds would then be used for enhancements within the CRA. The expansion proposal is subject to negotiations with Polk County.

In a step that could have enormous financial significance for decades to come, the Lake Wales Community Redevelopment Agency board has received a Finding of Necessity (FON) report from a consulting firm they hired two months ago.

The CRA is the source of millions of dollars that are currently funding major improvements to city streets, sidewalks, trail systems, lighting, and landscaping. Expansion of the area, if successful, would potentially balloon future revenue that could be used for such improvements.

The report, presented to the city commission sitting as the CRA board by Laura Canary of Inspiring Placemaking Collective (formerly S&ME), contained the necessary findings to allow that board and the commission to move the process forward in negotiations with Polk County. The report identified required "slum and blight" in the form of incomplete road networks, deteriorating structures, and declining economic activity within the boundaries.

The proposed expansion would roughly double the current size of the CRA district by taking in a large swath of vacant land on the northwest part of the city, as well as Eagle Ridge Mall. All the lands are currently within the city limits.

The included vacant lands are owned by Lake Wales Property Holdings, LLC (formerly Winter Haven Corporation) and are proposed for future development including some 6200 residential units, including apartments, townhomes, and single-family houses, along with new office, warehouse, and hospitality uses.

Because the CRA is funded by the "tax increment," or difference in valuation between a base year and new valuation, adding the vacant land could capture very large future increases as the property is developed. All funds captured would be restricted to use on enhancements within the CRA.

The captured funds would normally flow into the general revenue pools of both the city and county. Because Polk is a charter or "home rule" county, it has the authority to block the expansion, or negotiate the amount and use of the funds. 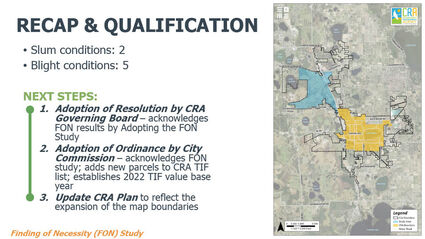 A summary of the "Finding of Necessity" study conducted by a city consultant was presented to the CRA board at their recent meeting. Both the CRA and city commission must officially accept the report findings before beginning negotiations with Polk County.

The mall was included in the study area largely because of public perceptions that it is in poor financial condition. The loss of major anchors Sears and JC Penny in recent years has dramatically reduced foot traffic, spurring the loss of other smaller shops.

Potential investment by the CRA in such items as façade grants was cited by Canary as a way to assist in recovery of the sprawling center. During commission discussion the concept of re-developing a portion of the site to host apartments was also raised. Such items as new exterior lighting, landscaping, and outdoor art installations would also be possible under CRA rules.

Once the FON report has been formally accepted by the CRA board and the city commission, it is expected that city and county staff will begin meeting to negotiate the future of the proposal.