By Kaitlin Kovacs and Jerald Pinson

Asian Invaders are Air Breathers, can Migrate Over Land 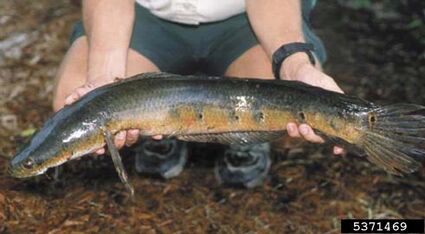 The Goldline snakehead fish breathes air, and is a carnivorous threat to native fish. It has been known to crawl onto land to catch and eat frogs.

A population of non-native aggressive, air-breathing fish known as the goldline snakehead (Channa aurolineata) was documented for the first time in the Gulf Coast region, according to a recent study. The fish were discovered in a freshwater pond in Manatee County, Florida, about 250-km from the only other known population of this species in the United States, which has existed in Broward County, Florida, since about 2000.

Native to Asia, snakeheads have been introduced to the wild worldwide due to their popularity in the live-food and ornamental fish trades and even sport fishing. However, the predatory fish is able to withstand diverse environmental conditions, including drought, and poses a risk to native ecosystems.

"Any reproducing nonindigenous species has the potential for deleterious effects on the environment to which it has been introduced," said Robert Robins, ichthyology collection manager at the Florida Museum of Natural history and co-author on the study. "Most never become invasive, but some do."

Upon discovery of the non-native species in Manatee County, officials with the Florida Fish and Wildlife Conservation Commission removed almost 400 snakeheads from the pond, several of which were catalogued in the Florida Museum's ichthyology collection. Seven other non-native species, including walking catfish (Clarias batrachus) and Asian swamp eel (Monopterus javanensis) were also removed.

Scientists compared physical and genetic features of the goldline snakeheads found in Manatee County with those recovered from Broward County and closely related species in Southeast Asia. The two Florida populations were nearly identical, and both shared a strong genetic affinity with snakeheads from the Mae Klong river basin of Thailand.

Since their introduction to Florida at the turn of the century, goldline snakeheads have infiltrated other areas, escaping through canals into nearby Miami-Dade and Palm Beach counties. They now seem firmly established in parts of Southeast Florida, but their discovery along the Gulf was unexpected. Because of the distance between the populations, the snakeheads in Manatee County are likely a result of human transport between sites rather than natural dispersal.

The report also provides observations of a rarely seen behavior of snakehead in the wild. During a rainy evening in 2020, several snakeheads slithered onto the grassy pond bank, lured by green tree frogs (Hyla cinerea) active at the water's edge. When the fish were in striking distance, they rapidly twisted their upper body in the direction of a frog, returning to the water after a successful catch. While snakeheads are known to move over land, their ability to feed while doing so emphasizes the fish's potential negative impact on native species.

Surveys in surrounding waters after the removal effort in Manatee County revealed no snakeheads had spread beyond the pond. However, further monitoring is needed to ensure the non-native fish have been eradicated.