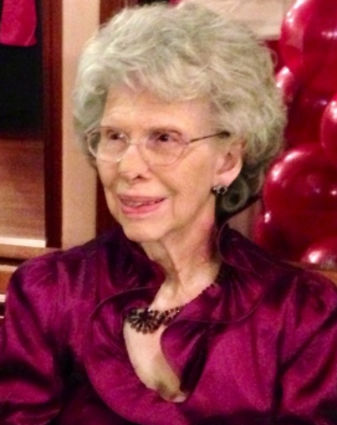 Barbara Sims Stango of Lake Wales went on to be with her Lord and Savior, Jesus Christ on Sunday, Feb. 3, 2019. She passed away peaceably at Pretty Pond Manor in Zephyrhills, FL. She was 96 years old.

She was born on Jan. 20, 1923 in Athens, GA. Within the year after her birth, her parents, Vaughn Adolphus (V.A.) and Ruth Jackson Sims moved to Lake Wales. While mayor of Lake Wales, her father participated with the dedication of the Bok Singing Tower with President Calvin Coolidge on Feb. 1, 1929.

Barbara was married to Carmine Stango of Brooklyn, NY on Dec. 7, 1945 , staying together until Carmine's death on March 26, 2016. She graduated in 1940 from Lake Wales High School and attended Florida Southern College.

Her family and everyone who knew Barbara can gladly testify that she was an extremely sweet, kind and considerate lady, always putting everyone's needs before her own. Her family also, enthusiastically agrees that her delicious buttermilk pancakes ere the best ever!

In addition to her husband, Barbara was preceded in death by her brother, Dr. Neil Sims of Asheville, NC. A Memorial Service for Barbara and her husband Carmine will be conducted by her family at the Lake Wales First United Methodist Church in March. Date and time to be announced at a later time.