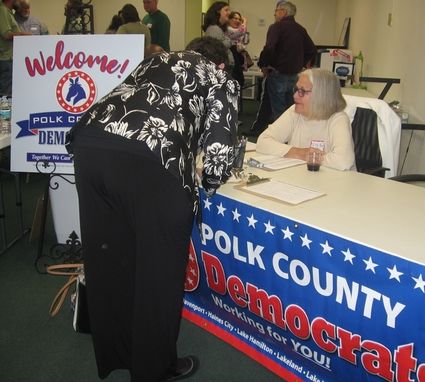 Ione Townsend signs in at the opening of the Polk County Democrat Party's new office at 1549 S. Combee Road in Lakeland. Sitting at the table is Ruth Ann Eaddy.

In its efforts to get more voters to the polls this November, the Democrat Party moved its headquarters to a more centrally located place in Polk County.

On Feb 2 the local political party had an open house at 1549 E. Combee Road in Lakeland moving from Haines City.

"This is wonderful," said Polk state committeewoman Karen Welzel. "This is the beginning of what we'll turn in Polk County."

About 100 people attended the opening of the office in Polk and Chair and the Executive Director of the DEC Dr. Kathie Sutherland said the Democratic Party is working hard to make its voice heard in Polk. After being dormant for about a decade, under Sutherland volunteers and employees are working hard to increase voter registration.

In the 2018 midterm no Democrat won an elected seat in the county. Despite that, Sutherland is confident the party will do better as she said the number of Democrats who voted in November's midterms was up 8 percent over the last midterm election in 2012.

The new office, Sutherland said, is just one move in the party's step toward getting people to recognize the Democratic Party is here for the middle class.

"This will help us move forward," she said, adding, "But now we've got to turn up and turn out and win elections."

She said all the committees of the party are staffed.

Sutherland pointed out that in the last two years three new clubs – the Democratic Women's Club, the Lake Ashton Democratic Club and the Young Democrats – have formed increasing the local party's membership by 350 members. The number of precinct captains increased by 22 to 110 people.

"We canvassed, had a phone bank, knocked on about 25,000 doors and maybe more," she said. "And it's all about increasing the turn out for Democrats."

One area getting particular attention from local Democrats is registering felons whose voting rights were restored with the passage of Amendment 4 in the 2018 election. This allows about 1.4 million released felons in Florida to vote.

In that effort, Bob Doyel, a retired circuit court judge and former candidate for the Florida Senate, has hosted many registration drives.

"Wherever there is an event," Doyel said. "At a business or a church ... it is good be around with people you know and trust." 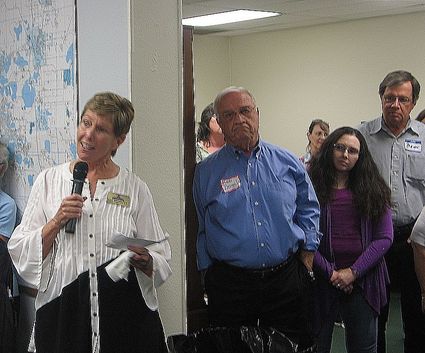 Kathie Sutherland, the chair of the Polk County Democrat Party, speaks to the crowd of more than 50 people who came to the open house at the new headquarters in Lakeland on Saturday, Feb. 2. Behind her to the left is retired circuit Judge Bob Doyel, who is heading up at voter registration campaign focused to get felons registered to vote following the victory of Amendment 4 on last year's ballot.

"This is a number one priority in many parts of the United States," said Shandale Terrell, who is running for a seat on the Lakeland City Commission. "We have to get to all corners – north, south, east and west – all over Polk County.

Democratic Party volunteer Judy Buss said there are 45,000 felons in Polk County itself who can be registered.

"If we could register half of them, we could win," she said.

Welzel believes that can be turned around again.

"We went up 8 percent in the last election. That was not enough to make a change, but knowing what we did ... "

She said through a Blue County coalition that has been formed with Polk and other blue counties in this area, their voice will be heard.

"This is to share what works and be on the same track," she said. "This is one definite way to make a difference."

For information on the Polk County Democrat Party: http://polkdemocrats.org/