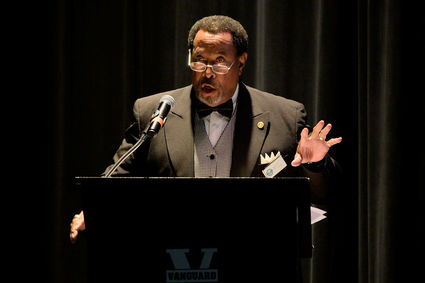 More than 100 civic and business leaders gathered for breakfast at the Vanguard School to hear the annual "State of the City" report delivered by Lake Wales Mayor Eugene Fultz on Wednesday morning, and most were impressed by what they heard.

Ranging from a summation of new businesses arriving, including a Lake Wales Medical Center Wound Care facility, plus Aldi's, Wawa, and Love's, to imaginative plans for re-invigorating the downtown area and Crystal Lake Park, the address was a virtual smorgasbord of changes, plans, and dreams, with something for every taste.

Other improvements mentioned included the purchase of two new police motorcycles and a new fire truck. The City's SR 60 West utility extension, which will ultimately include a new inter-connect with the City of Winter Haven, is presently paused while awaiting the completion of Florida Department of Transportation plans for SR 60 improvements, including a new overpass at the CRX rail crossing.

Highlighting plans for City purchase of the Lake Wales Family YMCA facilities in order to provide a public swimming pool, Fultz also mentioned increased CRA investment which has allowed the hiring of a consultant firm to help re-design the downtown and Lincoln Avenue streetscapes.

The recently-completed downtown "trail" near the Lake Wales Library, Fultz said, is only the first of three phases which will connect downtown to Crystal Lake and Lake Wailes Parks. The former is also the planned location of additional recreational facilities, including a "splash pad," a boardwalk, pickleball and basketball courts and a pro shop to serve the sports facilities.

Other City projects include the soon-to-be-started Alpha and Bravo taxiway extensions and resurfacing at the airport. Fultz cited the airport as an important future economic engine for the city.

Fultz told the attentive audience about new programs the city has sponsored, ranging from Movies in the Park to third-Friday live music events at the Peak Pavilion in front of the library, which will also include food-trucks.

The mayor also mentioned the impending changes to the US 27-SR 60 interchange, which will be disrupted by the construction of a large new multi-lane overpass structure and reconfigured traffic lanes. Other traffic concerns included design changes to Chalet Suzanne Road and Mountain Lake Road connections to US 27, both of which are seeing significant increases in traffic volume. 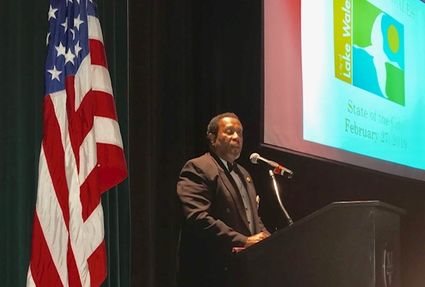 Fultz also took a moment to brag, mentioning that the city's recommended reserve was fully-funded for the first time in a decade, and that the city has held the millage rate once again. Next budget year, he suggested, it was likely that taxes would be reduced to the "roll-back rate," which will keep the budget the same, spread over a larger tax base. According to University of Florida estimates, Lake Wales' population (within city limits) grew to 15,791 in 2018.

City voters will be called to vote on April 2. The mayor and one other commissioner will be on the ballot, which will also include a proposed charter amendment to change commission terms from two years to three.