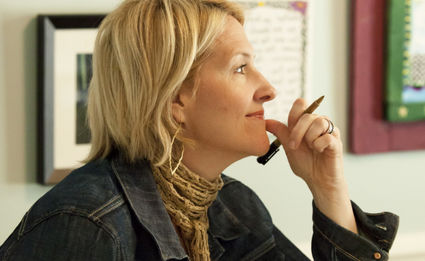 "Connection is why we're here. It's what gives purpose and meaning to our lives. This is what it's all about." Brene' Brown says this three minutes into her Ted Talk recorded June 2010, The Power of Vulnerability, https://www.youtube.com/watch?v=iCvmsMzlF7o

This video has over 36 million views. She has authored five books and has links to five videos on her web site, https://brenebrown.com. She says courage involves uncertainty, risk, and emotional exposure and that learning how to act with courage is a skill set, something we can learn.

On her web site, Brown says, "The bottom line: I believe that you have to walk through vulnerability to get to courage, therefore . . . embrace the suck. I try to be grateful every day and my motto right now is 'Courage over comfort.' I do NOT believe that cussing and praying are mutually exclusive."

In her book, Daring Greatly, she quotes Teddy Roosevelt from a speech sometimes called "The Man in the Arena:"

It is not the critic who counts; not the man who points out how the strong man stumbles, or where the doer of deeds could have done them better. The credit belongs to the man who is actually in the arena, whose face is marred by dust and sweat and blood; who strives valiantly; who errs, who comes short again and again, because there is no effort without error and shortcoming; but who does actually strive to do the deeds; who knows great enthusiasms, the great devotions; who spends himself in a worthy cause; who at the best knows in the end the triumph of high achievement, and who at the worst, if he fails, at least fails while daring greatly, so that his place shall never be with those cold and timid souls who neither know victory nor defeat.

She says that is what vulnerability is: Vulnerability is not knowing victory or defeat, it's understanding the necessity of both; it's engaging. It's being all in.

This idea is powerful; it encourages. It reminds us that we are all fallible, that we will all fail, but it is the striving that counts, getting back up after a failure, not anyone else outside our lives speaking criticism. She also notes most of the time we are our own worst critic.

Do a search on you tube and you will find 20 video links. Even if you prefer the written word to video, I recommend these. She has wit and honesty and she uses stories to get her points across. She describes herself as a researcher storyteller.

Brown's website has downloadable reading guides for Rising Strong and Daring Greatly. She has other downloads including The Wholehearted Parenting Manifesto, the Daring Greatly Leadership Manifesto, and much more. Her website also has links to 35 articles and podcasts.

From her blog on her website, The Midlife Unraveling:

When the Universe Brings It

I put up the fight of my life, but I was totally outmatched. The universe knew exactly how to use vulnerability and uncertainty to bring down this perfectionistic shame researcher: a huge, unexpected wallop of professional failure, one devastating and public humiliation after the next, a showdown with God, strained connections with my family, anxiety so severe that I started having dizzy spells, depression, fear, and the thing that pissed me off the most – grace. No matter how hard or far I fell, grace was there to pick me up, dust me off, and shove me back in for some more. It was an ugly street fight and, even though I got my ass kicked, it was the best thing that ever happened to me. There was a significant amount of pain and loss, but something amazing happened along the way – I discovered me. The real me. The messy, imperfect, brave, scared, creative, loving, compassionate, wholehearted me.

When you finish listening to the vulnerability talk and have looked around her web site, then watch her follow up talk from 2012 on listening to shame, https://www.ted.com/talks/brene_brown_listening_to_shame/transcript?language=en. You will leave her with lessons for a wholehearted life for yourself and tools for connection to everyone else.