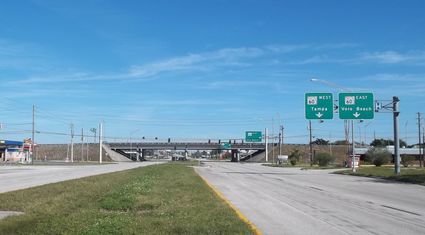 "The road to progress is always under construction," Lily Tomlin reminded us many years ago, and that is no less true around Lake Wales.

Keeping up with the rapid growth of the Lake Wales area will require major changes in how we travel. Several major road construction projects are planned. With them, of course, will come many disruptions. How will they affect you? Let us count the ways.

The biggest changes will be along our major highways, US 27 and SR 60. Those projects will be funded by the Florida Department of Transportation.

FDOT, as it's popularly known, will be in charge when the present overpass carrying SR 60 over US 27 comes tumbling to the ground. That will happen only after the completion of a massive new bridge, which will carry six lanes of motorized traffic and two bicycle lanes.

The new bridge and interchange will eliminate the present ramp system in favor of a traffic signal and dual-lane left turns under the bridge.

The project will also entail closing the Sharp Street connection south of 60, adding a light at the west entrance to Lake Wales Plaza, and construction of a new frontage road to serve KFC, UPS, and Crazy Fish restaurant, among others.

Construction on the new bridge is scheduled to begin next year, timed to accommodate the addition of new travel lanes on US 27, as that highway is widened to six lanes southward from Central Avenue. To be completed in phases, it will connect with the present six-lane section in Highlands County to the south.

That new bridge will eliminate more frequent delays which have been caused by the sharp increase in train and heavy truck traffic heading to the Intermodal center just north of the highway.

East of Lake Wales, FDOT will widen 60 to four lanes to the Kissimmee River, a long-awaited project. That work is also slated to begin in 2020.