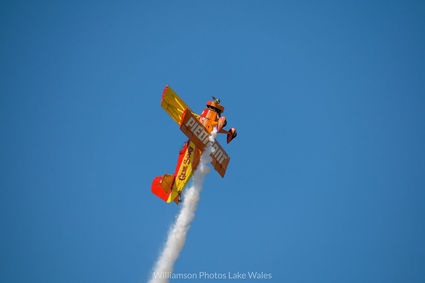 The 45th Annual Sun 'n Fun Fly-in and Expo is winding down with air shows scheduled Saturday afternoon and evening and finishing Sunday afternoon, April 7. In addition to the many fly-bys and aerobatic stunts, the show offers literally thousands of planes and exhibits to view.

Areas of the 2,200-acre Linder Airport in Lakeland are sectioned off for various types of aircraft; restored warbirds take up a large swath of land, while other areas feature home-build crafts, seaplanes, drones, gyrocopters and other unique flying machines like the paramotors on display by Aviator PPG from Lake Wales.

Eric Farewell's Paradigm Aerobatic Team will participate in their second evening show starting at 7:30 p.m. Saturday night, which also will have dancing drones and fireworks display in addition to the Golden Knights parachute team and various crafts performing maneuvers in planes adorned with decorative lights.

Florida residents who attend Saturday can come back Sunday for free; admission is $39 for adults and $18 for those ages 7-17. The Fly-in and Expo started Tuesday, but there's still much to see over the weekend.

Sun 'n Fun Executive Director John "Lites" Leenhouts said the 2019 event was exceeding all attendance records and vendors said sales were brisk. The Lakeland show is the second largest in the world and contributes an estimated $64 million to the Central Florida economy.

One of the top women aviators in the world, Patty Wagstaff from St. Augustine, delighted audiences with an aerobatic dance, pointing straight up and dropping through a variety of twisting, turning and rolling maneuvers. The event included more than 60 aerial acts. 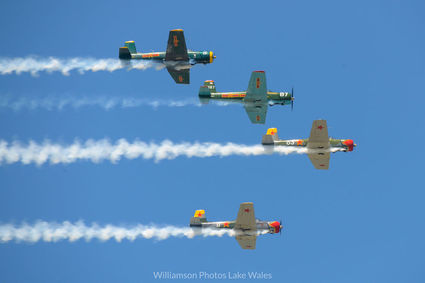 Wartime aircraft flew in tribute to military veterans, and amazingly enough, one featured aircraft called "That's All Brother," a C-47 actually led a stream of 800 C-47s making airdrop missions to open the Normany invasion on June 6, 1944.

The ever popular U.S. Navy Blue Angels flew in close formations, sometimes only 18 inches apart, then peeling off to reach speeds of up to 700 miles per hour. Spectators were amazed by the four-jet Diamond Formation, in concert with high-performance maneuvers of two solo pilots.

Linder is about a 45-minute drive from Lake Wales. If you can't make it this year, mark your calendars: the 2020 show is scheduled for March 31-April 5.