Braswell a Sports Legend at 83 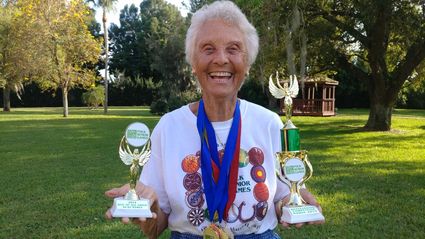 Claudette Braswell with some of her 30 Senior Games Awards

At 83 years young Lake Wales' own Claudette Braswell garnered a whopping 20 gold, eight silver and a pair of bronze to capture the highest total: 30 individual and team medals in 32 events at the PSG (www.polkseniorgames.org) that ended Mar. 11.

Braswell earned the honor of being awarded Outstanding Women Competitor 2019 besting more than 1,000 other female athletes and 127 in the 80-84 age group, which means she will return as Torch Bearer to kick off the Olympics-style Opening Ceremony in 2020.

Claudette is not a stranger to the podium. She wins the overall women's trophy nearly every year.

Although she limits her participation choosing to focus on the local Polk Games she does compete in a few select events in and around Florida.

For example, husband Jim and Claudette will make the trip to Flagler County so she can pitch shoes in the 2019 Florida State Horseshoe Championship beginning Apr. 10.

Dale Marteney, President of the Florida State Horseshoe Pitchers Assn. (www.fshpa.com) states, "Claudette is an inspiration to everyone who pitch horseshoes. Her attitude and camaraderie with fellow pitchers is second to none."

Second VP Vicki Marteney chimes in, "She is the sweetest competitor, and always gives her best. And she likes to win!"

Whether it be on the field, track, court, board or pit Braswell loves to train, play, and excel at the highest level.

Claudette was the youngest of four girls who were raised to adhere to the Christian faith. At the tender age of nine her family moved from Arkansas to Maryland. Not wanting to be overshadowed by her three older sisters Claudette found her niche-and her calling-in physical education class at school (her mother called it, "physical torture").

Although shy, Claudette was drawn to playing sports with the boys rather than following traditional activities associated with females of the era, i.e. home economics or babysitting.

When the superintendent of Prince George's County (Maryland) Public Schools professed that women did not have the stamina to compete in sports Claudette wrote a letter that was read aloud in front of the entire student body.

Little did she know it then but her enthusiasm for sports would be an inspiration to women everywhere.

Back in Little Rock as a little girl searching to find her path in life sports wasn't yet on the table. In fact, food was scarce and with her father in poor health, religion yielded the sustenance needed to forge ahead.

"Jesus is first in my life," states Braswell. "God opened the door."

And that door kept getting bigger due to the faith Claudette carried with her through the most difficult of times.

When Braswell was just 13 she answered an altar call and heard evangelist preacher Billy Graham speak. He told the audience that God has a plan. He puts people in our lives to encourage us. To put it in perspective, that life-altering event occurred over 70 years ago, and from that day forward Claudette made it her life's goal to be a source of inspiration to everyone she encounters.

Later, in college, her main sport in school was basketball which Claudette did well. So well, in fact, she played all four years at Towson University, and was both the high scorer and free throw percentage leader each year.

The Towson Women's Athletic Department honored Claudette for participating in the most intramural sports during her four years on campus which provided a glimmer of her propensity to all-around athleticism. Stamina, as it were, was not an issue contrary to (un)popular belief.

In 1994, she began participating in the Maryland Senior Olympics, and in 1997, she signed up for the local Florida version, the Polk Senior Games, where in one single year she competed in thirty-three events receiving one bronze, four silvers and twenty-six golds. 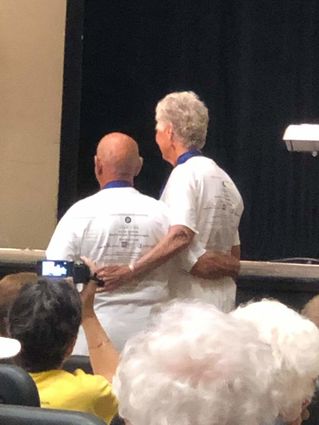 In 1971, Claudette was ordained a Deacon at the United Methodist Church at the National Cathedral in Washington, DC, and has taught Bible study to countless souls throughout the years. In 2012, she won the Maryland State single's horseshoe pitching competition for women.

This year at the PSG a major sponsor decided to select a handful of athletes to participate in a "Humana Game Changers" baked goods eating contest. Claudette won hands down, as usual, and casually generated a several thousand dollar donation to her charity of choice, one based in Lake Wales, of course, proving once again that by giving your best good things happen to those around you. Claudette Braswell is truly second to none.