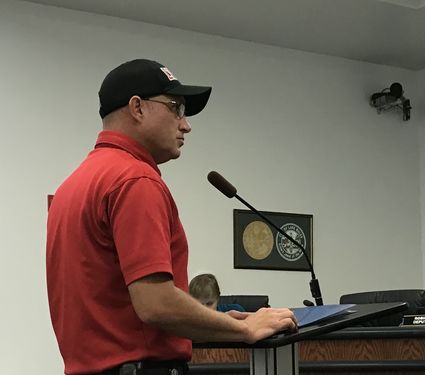 About one-third of the City of Lake Wales staff recently participated in a two-day training program to help them become "servant leaders."

Texas consulting firm SGR conducted the training "A Radical Strategy for Creating an Authentic Servant Leadership Culture" for the city's supervisory personnel and those likely to become supervisors.

The 65 trainees chose Lake Wales Fire Department Lieutenant Paul Byrd to share their workshop experience with city commissioners. After hearing about the training, commissioners indicated they would like another session where they could participate and work to define the city's overall mission and core values.

Byrd said the supervisors took an online survey where their answers led them to be categorized as one of four types of leaders: Logistical Processors, Hypothetical Analyzers, Reactive Stimulators or Rational Innovators. He said communications is key and understanding the kind of information other supervisors consider before responding to new ideas, issues, goals or the process can help them better work together to find solutions and provide good customer service.

Byrd said as an example, City Manager Ken Fields as a Rational Innovator may be saying "go, go, go," while he as a Logistical Processor might be saying, "whoa, whoa, whoa."

The supervisors also talked about current training and future opportunities. But Byrd said much of their discussion centered around the city's reputation – what it is currently, what is desirable and how to transform it. They also talked about the importance of marketing the city, sharing the good things that are happening.

"We came up with one pretty good idea, through communication of all our departments or through our departments, a shared vision, core values, leadership and the city's mission to improve customer service that will inevitably build reputation," Byrd said.

Vice Mayor Robin Gibson expressed concern that the city's mission and core beliefs are not well defined and understood by all employees and citizens.

Commissioner Al Goldstein said it's important to share the core values with the public: "Reputation is very important to us, the city and the people we want to bring into our city."

Fields said he would contact SGR to discuss the costs and logistics for another workshop, which he said might need to be on a Saturday and would need to be a public meeting.

SGR, which stands for Strategic Government Resources, was founded in 1999 by Ron Holifield, who had two decades of experience in city management. The company now has more than 300 government clients in 41 states. The company says it exists to help local governments be more successful at recruiting, assessing and developing innovative, collaborative, authentic leaders.