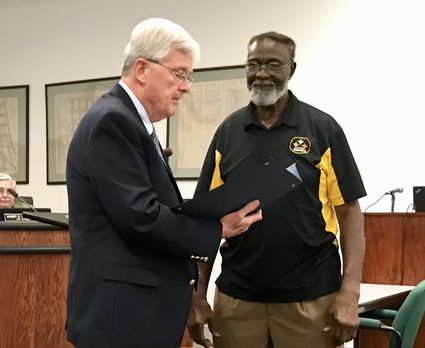 Lake Wales Mayor Eugene Fultz declared June 4 as Richard Deloach Recognition Day to honor him for his more than 35 years of service as a youth football coach.

Vice Mayor Robin Gibson read the proclamation at the city commission meeting, where friends and family of Deloach gathered to celebrate.

According to the proclamation, Deloach started with the city youth football league in 1984 and led his team to 14 league super bowls, 11 of which they won.

"Richard Deloach is a compassionate coach, is dedicated, a team player, and works well with kids of all age groups," the proclamation said, noting he "has tried to help any kid who wants to play be able to play regardless of ability to pay."

The proclamation also noted Deloach was being recognized for "the assistance, accomplishments, facilitation, cooperation and dedication he shows to his athletes every day."

Deloach recognized his 86-year-old mother, who was in the audience and thanked his children and former wife Diane for their support and involvement as they spent countless hours at the field. He also thanked his fellow coaches and the parents who entrusted their children to him while participating in the program.