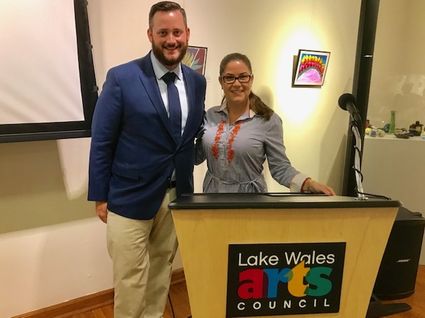 Executive Director Andrew Allen, who completed his first year in March, thanked partners, spelled out a long list of accomplishments and shared highlights of plans for the coming year.

"The Lake Wales Arts Council has seen an incredible amount of success during our 2018-19 season," Allen said. "We have been fortunate enough to maintain our classic programs while introducing new events and classes that further our mission. The support of these programs has been breathtaking."

Arts Council Board President Erica O'Neill also thanked supporters and noted while last year's transition was at times bumpy, the organization is on track and looking forward to a bright future. She recognized outgoing Board Member Blair Updike for her service and welcomed incoming Board Member Rusty Ingley. Allen said the Center is looking forward to art exhibits by Updike and sculptor David Price in the coming year.

Allen said during the past year the Arts Center has served more than 500 students 1-on-1 or in group classes to learn about painting, drawing, sculpture, classical music, jazz music, rock 'n roll, music theory and much more. An outreach effort permitted more than 1,000 local K-12 students to interact and learn from GRAMMY, EMMY and TONY winning performance artists. The Arts Council also worked to provide visual and performing arts classes to disadvantaged youth and adults through the Lake Wales Family Literacy Academy. Other outreach programs Allen mentioned include providing an "instrument petting zoo" in conjunction with the Lake Wales Mardi Gras and sponsoring the kids' tent during the Orange Blossom Revue barbecue event and festival sponsored by the Rotary Club of Lake Wales.

The Arts Center also hosts camps during the summer, spring and Thanksgiving breaks, Allen said, noting "Many students would be sitting at home playing video games and watching TV," but now they have opportunities for high-quality fine arts education programming.

"Our local businesses, private foundations, and generous donor base have helped us provide initiatives that our city needs and deserves," Allen said. "Lake Wales has a rich history of fine arts excellence, and I'm proud to continue that history into the 21st Century."

The Annual Report spelled out the group's vision "to create a vibrant cultural arts destination" and its mission "to build a community where art and culture thrive, enriching the lives of people."

"The Lake Wales Arts Council has gone through an incredible revitalization effort, which included over 30 new programs, new grant acquisitions, new local and statewide partnerships, and the development of weekly educational programs," according to the Annual Report.

Allen closed the annual meeting by announcing some of the plans for 2019-2020, including: the Concert Series to be headlined May 7 by 15-time GRAMMY Award winning instrumentalist Bela Fleck and his wife Abigail Washburn, a two-time GRAMMY winner. The concert series also will feature master vocalist Whitney James and lyric tenor Patrick Muehelise, GRAMMY=nominated guitarist Jim Saelstrom and two-time Guggenheim winning and GRAMMY-nominated saxophonist Jack Wilkins. In addition to Updike and Price, the Center is planning an exhibit by nature photography by Adam Bass of Winter Haven. 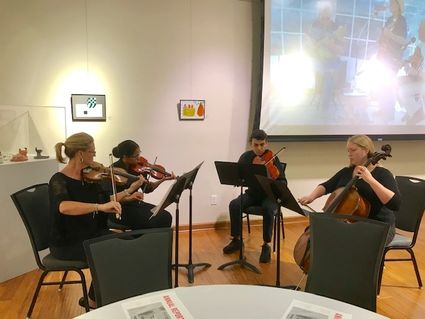 Allen called his first year as executive director as "an incredible ride." He said the Arts Council has existed for nearly 49 years, noting "We have survived financial depressions, housing crises, hurricanes and so much more. I believe that we survived because of the generosity and support of our community members.