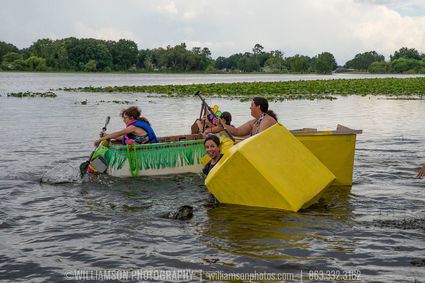 The forecast rains stayed away so there was a whole lot of paddling going on at the first ever Beach Battle hosted by Tanner's Lakeside Restaurant and Bar in Winter Haven. The event raised funds to support the Rotary on the Ridge water safety initiative.

An adult-size version of Josh the Baby Otter made an appearance, dancing and posing with event participants. The water safety program uses Josh the Baby Otter materials to remind young children to stay away from the water when there are no adults present and to learn to flip on their backs and float should they ever find themselves in a potential drowning situation. Drowning is the number one cause of death for children age 4 and under so the club is making presentations to kindergarten and Pre-K students and plans to eventually coordinate free swimming lessons.

Event coordinator Kami Rickert, a Rotary on the Ridge member and the owner of Paddleboard Winter Haven, said she was pleased with the event's first year participation and happy for the large turnout of club members to help along with strong community support.

The Beach Battle included kayak, paddleboard and cardboard boat races. Using materials donated by Lowes, groups of families and friends used cardboard, duct tape and paint to create watertight boats for a short race on Lake May. Some of the boats took on water, but prematurely sinking didn't dampen the fun and enthusiasm for the race. The Gillis family boat took first place in the race and Rylee Tanner and Juelz Zenteno created the "Best Boat." 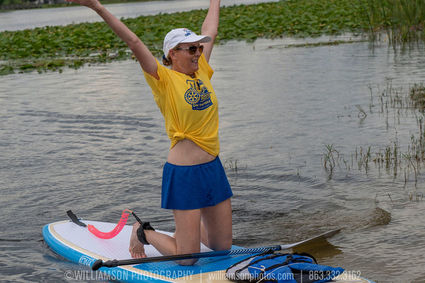 Rotary on the Ridge was chartered in December 2016 by Rotary International. The regional after-hours service club attracts members from throughout East Polk County and meets at 5 p.m. on Mondays at the Ouellette Law Firm, 151 E. Central Ave. in downtown Lake Wales. People who are interested in service, networking and fellowship are invited to visit. To find out more, visit the club's Facebook page at https://www.facebook.com/RotaryontheRidge/ or call 863-651-1065.

For a larger gallery of photos, go to https://www.lakewalesnews.net/photos