By Brandon McKinley
University of Florida 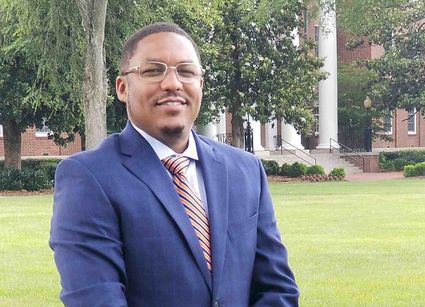 Osubi Craig, a multi-talented higher education administrator, traditional African percussionist and arts advocate, joins the University of Florida College of the Arts as its inaugural director of a new center focused on arts, migration and entrepreneurship. (Before becoming a special assistant to the president of Virginia State University, Craig served as director of arts and cultural affairs for Polk State College in charge of the Lake Wales campus.)

The new center, which will be realized in Fall 2019, is a response to UF Provost Joseph Glover's call for "moonshots," big ideas aimed at solving some of society's most urgent problems.

The College of the Arts' proposal, called "Migration Redefined: Arts, Diaspora and Entrepreneurship in the 21st Century," rallies the expertise of faculty across the university to address the lack of infrastructure for the arts and cultural economy of migratory and diasporic communities in Florida and beyond.

"Migration is a major issue that is crucial to the discussion of how we interact as human beings in societies that are forming overnight," Craig said.

Florida is a major laboratory to springboard this work as the third most populated state in the U.S. Over 20% of Florida's residents are immigrants, who are disproportionately likely to be entrepreneurs.

"There is an opportunity to position the arts and culture of communities as assets," Craig said. "It's exciting to position culture in policy decisions for the design, development and revitalization of communities."

As a land grant university with extension units in every county through UF's Institute for Food and Agricultural Sciences, Craig said the university has community relationships and access to data and trends that no other institution in the state of Florida has.

"I think the opportunity of this center is so unique," he said. "No one else in the country is looking at it in this way."

Craig comes to UF from Virginia State University, where he served as the Special Assistant to the President for Strategic Initiatives and Director of Government Relations. His role at VSU included being the president's top advisor and direct liaison with local, state and federal legislature.

"There's an amazing amount of momentum for VSU right now," Craig said. "We have achieved innumerable successes and are at a defining moment in the history of the institution. There is never a good time to leave when the work is good, but this position at UF is an opportunity to serve a community I know and love."

Craig's move to Gainesville is a move home. He graduated from Gainesville High School and was a proud member of the Purple Hurricane Marching Band.

He spent his undergraduate years at Florida A&M University, where he received a Bachelor of Science in industrial engineering and a minor in jazz studies.

A third generation percussionist, Osubi's youth was focused on the preservation, perpetuation and study of cultural arts of the African diaspora.

Early in his career, he followed his passion for the arts, working extensively with major performing arts organizations, serving as a staff musician and program consultant for the Alvin Ailey American Dance Theater and National Dance Institute's Arts in Education programs.

He served as lead drummer for Kulu Mele African Dance & Drum Ensemble in Philadelphia and the African Caribbean Dance Theater in Tallahassee. Osubi is also the founder and artistic director of the Prophecy Music Project, a Philadelphia- and New York City-based ensemble of professional dancers and musicians dedicated to the performance, practice and preservation of traditional African and African diasporic music and dance.

Osubi's desire for growth led him back to Tallahassee where he earned an M.A. from Florida State University in arts administration with an emphasis on grants and program management.

During and after graduate school, Craig served as the Assistant Director of the Office of Black Diasporan Culture at FAMU, facilitating concerts and performances, lecture series, international education travel experiences, and community outreach programming.

He has served as Director of Arts and Cultural Affairs at Polk State College in Lake Wales, cultivating a diverse audience and commissioning performing and visual arts programming that covered a broad base of genres and taste profiles.

As director, he oversaw art gallery programming and operations for the center and was involved in donor cultivation, grant writing activities and fundraising efforts to support programming.

Under his leadership, the Polk Lake Wales Arts Center was rebranded as one of the primary cultural hubs in Central Florida for visual and performing arts.

Craig said he never expected to move back to Gainesville, but that his experience growing up in the town will help him connect with the community.

"I am returning to Gainesville as a son of Gainesville," he said. "I can immediately have a shared experience with those I will interact with. That level of connection goes a long way when you're entering into a community."

He believes the core of his new position is community work, something he is well equipped to approach.

"I am able to seamlessly move between circles, whether it's talking with local artists, community members or policy makers," he said. "Being a musician and participating in cultural spaces allows me to connect with artists, creatives and practitioners in a way that is often challenging for some administrators."

His experience in higher education administration and his undergraduate training in engineering has built him to be a problem solver that understands the structure of a university system and how to navigate it.

Craig said he looks forward to joining a university with such unique opportunity. He has not been able to find another institution focusing on the intersections of arts with such relevant and immediate areas of local and global concerns as migration and entrepreneurship.

Craig begins his position at UF in late July, and he will begin meeting with faculty across the campus in early August.

"To have my love and affinity for the Gator Nation now a part of my professional life is absolutely wonderful," Craig said, "and I am ready for what comes next."