Rotary on the Ridge Names Drew Truitt Rotarian of the Year 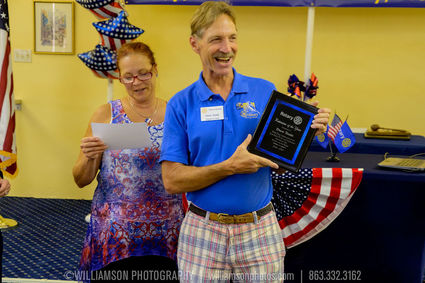 Rotary on the Ridge honored Lake Wales resident Drew Truitt as the club's 2018-19 Rotarian of the Year.

The award was presented Monday, July 1 at the club's annual celebration and installation banquet. In presenting the award, 2017-18 Rotarian of the Year Sandra Wolf said he rarely misses a meeting and shows up for every service opportunity and all the fun club events. 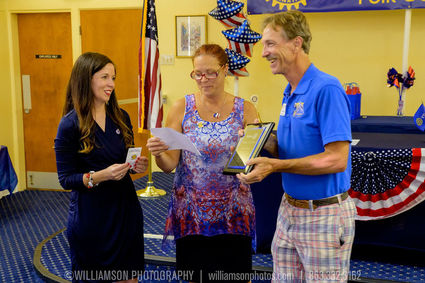 "Our Rotarian of the Year serves as an ambassador for our club and has sponsored several new members," Wolf said in leading up to the surprise announcement. "This Rotarian gathered prizes and sold treasure maps, helped present our Josh the Otter water safety program to school children, staffed our outreach booths and even poured wine at community events."

The secret was revealed when Wolf said the Rotarian of the Year helps make meetings fun while collecting "happy dollars," which are Truitt's responsibilities as club sergeant-at-arms.

"It takes all of us to make a successful club. But each year one person is recognized as Rotarian of the Year," Wolf said.

Truitt received a plaque and Rotarian of the Year lapel pin.

Truitt owns Inc. Inc., a T-shirt and specialty advertising company. He also assists wife Linda at Melange Antiques and Art Gallery and finds and sells vintage vehicles as part of his Florida Pickers operation. Truitt also is co-founder of lakewalesnews.net.