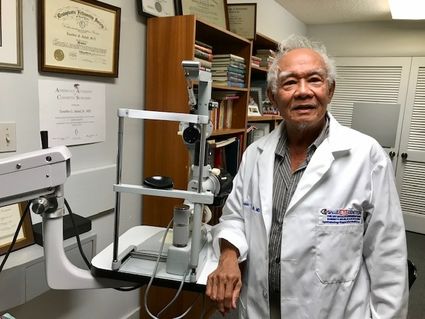 Many doctors in their eighth decade would be golfing, traveling or just enjoying retirement. But Dr. Eusebio "Jon" Salud Jr. is spending his later years treating patients with a new procedure that he says is helping to restore their vision.

According to Salud, dry macular degeneration is a leading cause of permanent blindness and for 56 years there has been no treatment available for it. He started a noninvasive, safe, simple and painless protocol about five years ago. He says it is "restoring a better visual world" for the remaining years of his patients.

"Because in any dictionary, degeneration means dead. In all this time of more than 56 years it has been assumed that it is impossible to restore function if the tissue is dead," said Salud, who tells people he's 18, but you can reverse the numbers.

Salud acknowledges mainstream conventional medicine still considers it incurable, but he begs to differ because of patient descriptions of better visual improvement. He says he has brought "reality and possibility for what was assumed to be impossible."

Salud's patients are singing his praises and telling others about the progress they have seen. To protect their privacy, we are using just first names.

"My good left eye is seeing clearer with or without my glasses, and my bad right eye has more peripheral vision," says 90-year-old Connie, who was diagnosed with macular degeneration in 2007.

Shirley, an 81-year-old being treated with Dr. Salud's protocol since 2015 says, "Colors are brighter, everything is clearer than before." She said she passed the eye test for her driver's license.

Seventy-five-year-old Rudy had wet macular degeneration treatments for 20 years, but his vision was still fuzzy and blurry. He said after starting Dr. Salud's protocol in 2014 his field of vision was broader and wider and the glare from headlights no longer had a halo. "I can define traffic lights very clearly since treatment. I can see my wife and pick her out of a crowd of women because I can now see the details in her face. I can now see the leaves on the trees.

Angela, a 42-year-old, said "After Dr. Salud's protocol my bad eye is now seeing better than my good eye."

Salud said his protocol isn't widely recognized because he is not interested in publishing a double blind study, since he would have to deny the procedure to some patients in order to show that it works on others. He says the proof is in the results reported by his patients.

Salud earned his M.D. degree at Far Eastern University and he completed a two-year preceptorship in ophthalmology at the leading Tamesis Clinic in the Philippines. He interned at Jewish Hospital in Brooklyn, NY, did his ophthalmology residency at St. Luke's Hospital Center in New York City, an ophthalmology fellowship at University of Connecticut and post-graduate ophthalmology work at Harvard University. He is a medical diplomate and fellow of the American Academy of Anti-Aging and Regenerative Medicine and a member of various professional medical organizations.

In addition to dry macular degeneration, Salud treats patients for glaucoma and cataracts. He also has specialized in various micro surgery techniques. The Salud Eye Center is located at 441 11th St. in Lake Wales and can be reached by calling 863-676-7904.