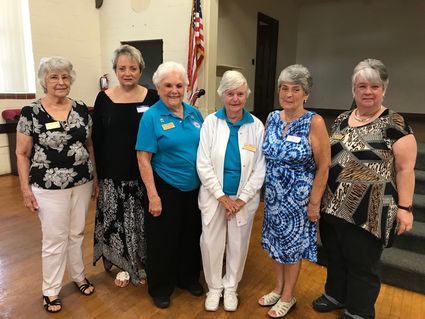 In 1914 Nellie Stewart gathered 17 Lake Wales women for a "thimble party" and while they chatted and sewed they decided to form a club. Now 105 years later, members of the GFWC Lake Wales Woman's Club gathered July 10 for a tea and luncheon where they encouraged guests to join their organization.

Secretary Mary Walkup described the club's history, which included an amazing list of accomplishments. The Woman's Club over the years has spearheaded or been involved in many local initiatives including the Lake Wales Public Library, the pavilion at Lake Wailes lake, the first May Day festival, the Lake Wales Follies, a Spook Hill visitor station, Fine Arts Festival, high school student scholarships, Literacy Council, eye screenings for preschoolers, Pioneer Days, Make it Magical and many more.

The clubhouse at 275 E. Park Avenue was decorated Wednesday with fresh flowers, including the hibiscus, the club's "official flower." The original club flower was the wild lantana.

In early years the club called itself the Merry-Go-Round Mutual Air Society, later changed to the Civic League. In 1920 the group joined a federation of clubs and became the Woman's Club. Original dues were one dollar and a portion went to the Orphan's Home in Jacksonville. Now dues are just $40 per year, plus a $5 first-year initiation fee.

Each club committee chairperson described priorities, offering prospects a variety of projects that might interest them. 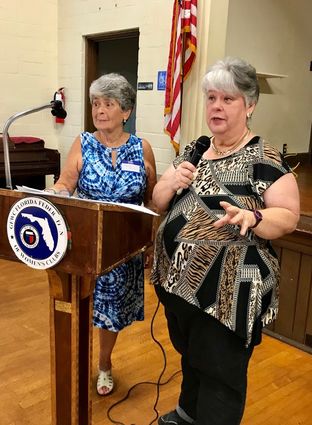 "There are a lot of options to find something that's close to your heart, something you really want to work on," Rankin said.

Arts chairperson Schultz reminded members to start working on their own arts and craft projects, which will be displayed in January, with some going further for regional or state recognition.

Bray talked about a special focus on domestic violence, which includes abuse of all kinds, even from women toward their husbands.

Walkup said this is the first time the Woman's Club has held an event of this type and that the club is always looking for new members who want to get involved in the community.

"We are not meant to hoard our talents. We are meant to share," she said.

For full gallery of event photos go to https://www.lakewalesnews.net/photos