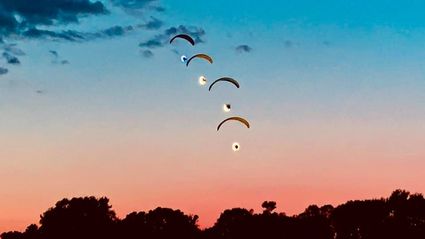 Lake Wales is well-represented at the world's largest air show in Oshkosh, Wisconsin this week as Eric Farewell and his Aviator PPG team take to the skies to show off their paramotor flying skills.

Wearing what look like large, round fans on their backs and dangling from parachute canopies, the four-person team again is sharing some of the aerobatic maneuvers that delighted audiences in May at the Sun 'n Fun Air Show in Lakeland.

"It's a great honor for us to be invited back," said Farewell, noting this is the team's fourth year at Oshkosh, where they debuted their performance. "It feels like home to be back here representing Lake Wales."

Farewell's Paradigm Aerobatic Team is performing four evenings at the EAA Airventure Oshkosh, which for its 50th anniversary is expected to draw a crowd of 600,000 to this year's event July 22-28. Aviator PPG also will exhibit at the event, describing the experience, showing off equipment and recruiting new paramotor enthusiasts. 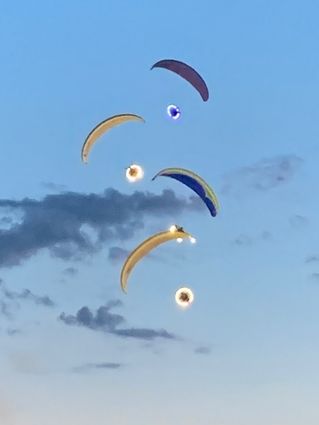 Aviator PPG operates from the Lake Wales Municipal Airport, and 13 members of the group traveled to Oshkosh. People interested in paramotor flying come to Lake Wales from all over the world for 8-15 days of lessons and aerial adventures.

This is how the Aviator PPG website describes the experience: "Simply put, powered paragliding is having a paraglider overhead and a motor on your back. Imagine sitting in a canvas lawn chair in the sky."

Farewell said the next public performance for his team will be in Pennsylvania in mid-September. For more information about the group or training, visit their website at https://aviatorppg.com/