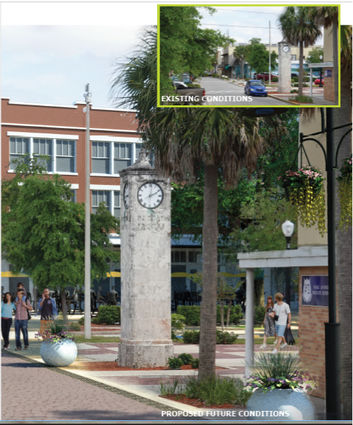 Lake Wales City officials are reviewing the 100-plus page draft "Neighborhood Plan for the Core of Lake Wales" in preparation for its official presentation Aug. 13 by urban planners from Dover, Kohl & Partners.

"Lake Wales Connected is more than just a plan for improvements to a single street, district or neighborhood; it is a strategy for revitalization of Lake Wales' historic Downtown and one of its most important close-in neighborhoods. Together, the Downtown and Northwest Redevelopment Area comprise the 'Core of Lake Wales,'" according to the plan's introduction.

Through its Community Redevelopment Agency the city committed $95,000 to fund the study to match $93,940 from private sources generated by the Lake Wales MainStreet organization. Dover, Kohl & Partners started the process with a January mixer and spent a week in Lake Wales in April holding community meetings and obtaining public input. Their consulting team includes urban designers, town planners, and architects as well as an economist and traffic engineer.

In the coming weeks LakeWalesNews.net will be publishing a series of articles to explore various aspects of the study. Those wishing to review the draft should contact MainStreet Director Karen Thompson, who also serves as the city's Assistant CRA Director, via email at [email protected]

The plan has a wealth of charts, graphs and photos, along with renderings of various existing locations shown with overlays of trees, pedestrians, and redesigned buildings demonstrating how a revitalized downtown and northwest business district might look.

"The essential tasks of the Lake Wales Connected plan is to repopulate the core area neighborhoods, re-inhabit vacant buildings, and fill area streets with activity," according to the Current Conditions section of the draft plan. The consultants noted that Lake Wales has "strong 'bones' of a traditional town, with historic street-oriented buildings lining streets and sidewalks," but noted "a sparse tree canopy fails to provide adequate shade on area sidewalks."

"Over time, as activities moved out from the center of town, vacant buildings began to mix into City street scenes, and less activity was found on area sidewalks, particularly after the end of the workday," the study noted.

The consultants recommend various changes to existing streets, sidewalks, parking, building facades, lighting and landscaping to promote downtown as a place for social and economic activity. One example, the consultants propose making Stuart and Park avenues downtown two-way streets with parallel parking on one side to make more room for landscaping and wider sidewalks to promote activity. 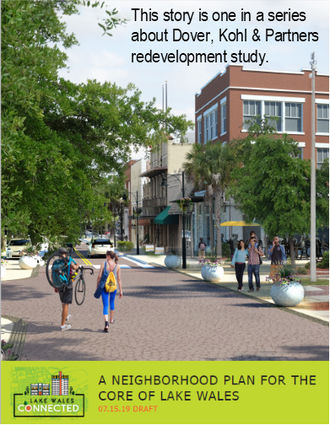 Recommendations fall into five ideas: 1) Design – Moving Quality Design to Top Priority, 2) Activate – Attract the community back to the Core, 3) Connect – Joining Neighborhoods and Parks, 4) Populate – Residences in the core support revitalization, and 5) Empower – Make it easy to implement the vision.

The study also includes a draft action plan to implement recommendations – things that could be done in the near-term years 1-3, mid-term years 4-6 and longer-term 7 years and beyond. The recommended actions include ballpark cost ranges and potential funding sources.

City commissioners have been awaiting the Dover Kohl study so they can discuss how to get started with the redevelopment process in the upcoming 2019-20 budget, which takes effect Oct. 1. Commissioners will hold a budget workshop starting at 6 p.m. Tuesday, Aug. 13 after a Dover, Kohl & Partners presentation at 5 p.m.