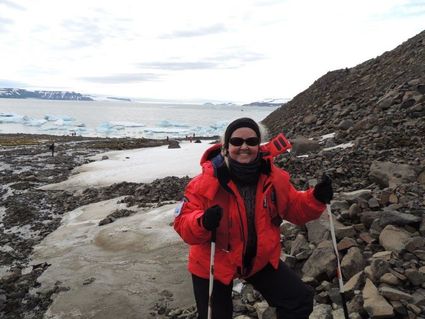 Cynthia Rignanese hiking at Cape Yalik, where no humans had gone before.

Cynthia Crofoot Rignanese is a world traveler extraordinaire, recently completing an arctic adventure that took her to her 109th country and 7th continent. This trip was particularly exciting as she became the first person ever to set foot on Cape Yalik, a remote site on one of the 192 uninhabited islands of Franz Josef Land in the Russian High Arctic.

The Lake Wales attorney, with a law office in Winter Haven, works hard so she can devote about two months each year to her world travels. She recently achieved her goal of visiting both the Arctic and Antarctic continents within one year of each other.

Rignanese's monthlong July-August adventure this year took her not only to the Arctic, but also to Norway, Latvia and Lithuania.

Rignanese spent two weeks on a 295-foot-long Russian expedition ship, the Sea Spirit, taking morning and afternoon arctic excursions aboard 12-passenger inflatable zodiac boats, each carrying a naturalist or other professional along with an armed Russian guard. When their boat was unable to make its planned stop on July 24, the captain landed instead at Cape Yalik.

"We were the first recorded people to ever land at this site," Rignanese told members and guests at a Lake Wales Kiwanis Club meeting Sept. 16. "People have landed on other parts of this island, but not at this location."

Rignanese described using two hiking poles to climb up the rocky river valley to the glacial moraine at Cape Yalik to enjoy the view.

"I found a large boulder, sat down and tried to absorb the scene and the feeling of being in a place no one else had ever been," Rignanese said, noting she climbed down through the snow, which was easier than the rocky ascent. 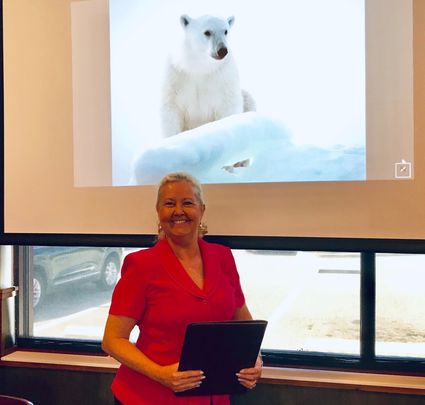 Rignanese enjoys sharing her journeys and displaying photos of the trip's highlights, including glaciers, polar bears and humpback whales. She peppers her talks with facts about the animals she sees, noting that male polar bears can grow to 1,300 pounds, about twice the size of females, and they can swim for up to nine days straight at speeds of six miles per hour. Rignanese said polar bears are 99 percent carnivorous and can sit for as much as three days waiting for a seal to come out of its hole; and they can eat 40 kilograms of meat (about 88 pounds) in one sitting. About 20 percent of the estimated 20,000 polar bears that exist in the world live in Franz Josef Land and Rignanese saw six on her trip. The area has no penguins but is home to hundreds of thousands of birds, which Rignanese said the polar bears eat only if really hungry.

Another highlight was an encounter with three humpback whales, including a calf, frolicking beside the ship to the delight of its 92 passengers.

Final approval from the Russian government came just three days before Rignanese was set to travel, and she had to use her network and pull some diplomatic strings to make it happen.

"Getting to and traveling in the Polar Regions of our glorious planet is not easy. It isn't easy getting there. It isn't easy being there. But the trouble is worth the effort," Rignanese said, calling it a once in a lifetime opportunity.