How I Got to FLY! 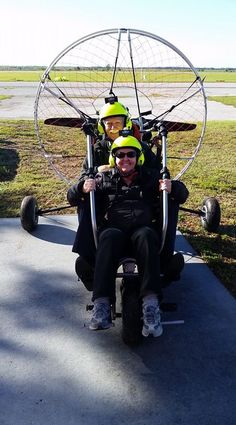 I remember my excitement a few months ago, when I received the call. A mere 16 hours from that call, I was getting to do my First (unlikely my last) paramotoring flight, the purest form of flight for a human!

I was SO Excited! I had been trying to do this for two years!

Several people made that day possible. It started with Evan Purdy, for planting the seed in my mind two years ago. Next was Terri Awesome Miller for facilitating and inspiring. And, best of all, Bob and Eric Farewell, whose reputation preceded them as great pilots.

What is amazing is that Pure Flight Aviation and AviatorPPG are right in Lake Wales at the Airport! http://www.pureflightaviation.com and https://aviatorppg.com/ are the websites for readers who love adrenaline, wind therapy, adventure and/or experiences!

My amazing Tandem Paramotor Flight was with Bob Farewell on a crystal-clear, windless morning!

Takeoff was easy, smooth and fast. Before I knew it, we had left the grass and were literally soaring with the birds for 30 minutes!

Although there are five (5) separate harnesses, none of it is tight; and once I was in it, I didn't notice it at all. It is just like sitting in a reclined lawn chair with your feet stretched out!

Bob is an expert on local plants, birds, and the area around Lake Wales. His knowledgeable commentary added greatly to the flight. We communicated through the headsets installed in the helmets.

From the ground, the engines sound loud; in a helmet in the air, although I knew the engine was there, it doesn't sound loud. I later guessed that it was because we were physically in front of the engine.

In a tandem, my pilot Bob sat behind me, so my view was unobstructed! It really did feel like flying!

Twenty minutes into the flight, Bob even let me take the hand controls and "drive" us! I kept thinking, this is "Just a WOW Experience!"

The motor, engine, propeller and fuel section of this tandem weighs 60 pounds; the wheeled seating area is less than 30 pounds.

The "wing" or canopy we used is the largest at 41 meters. It's double layered with "cells" of air pockets.

There is a bit of a learning curve when you first take off. It is as if your brain is not quite sure if you are safe or not. The higher level part of the brain cortex knows it is safe, but a little part (very little for me), wondered.

So, is it safe? I had done my research, both on the sport of paramotoring, and on my pilot. 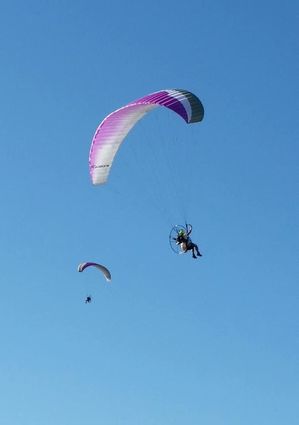 I joked with a friend that night that I was not worried. Since I write wills and trusts as my profession as a lawyer, I knew that my estate plan was current and correct, in case something went wrong.

Nothing is ever completely risk free, but paramotoring is considered safe. You're generally, and statistically, more likely to die traveling to the airfield in your car, than you are flying a paramotor!

© Cynthia Rignanese, 2019 - The author is an attorney based in Winter Haven (www.RignaneseLaw.com) who is an avid world traveler; she has visited or lived in 109 countries. She has traveled by many usual and atypical means, including an ostrich, but not until 2019, on a paramotor flight.