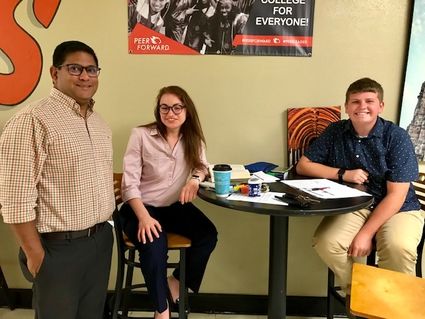 Estefany Arenas was born in Mexico and came to Lake Wales at the age of eight. Her family worked in agriculture and had very limited means, and "Things didn't come easy. It was very hard."

"College wasn't really on my radar until I went to Lake Wales High School," said Arenas, noting her International Baccalaureate diploma in 2015 helped her attend Stetson University in DeLand on a fully paid scholarship. "I was incredibly inspired by my IB teachers who helped me all the way."

The valedictorian of the Lake Wales High Class of 2015, Arenas is now in her first year teaching pre-IB Spanish and English honors. She said her teachers, now her colleagues, inspired her to come back and teach for at least one year before she heads off to law school.

Arenas is just one of the many success stories that can be shared by Anuj Saran, assistant principal for IB and operations.

The rigorous IB program primarily is found in the nation's most elite public or private high schools. Despite significant challenges, including a student body with about 71 percent being considered poverty level, Lake Wales High School is breaking that mold and being called upon to inspire other schools by sharing its high levels of student success.

IB students not only complete rigorous college preparatory courses, but also can earn college credit by taking post-course exams. Those with a passing exam score of 4 can earn four credits in each of six study areas, while those with scores of 5 to 7 can earn eight college credits in each of the six areas. In the last six years 156 LWHS seniors have earned IB diplomas, completing all 6 IB Diploma classes and the IB Core theory of knowledge, community service and the extended essay. Another 185 have completed one or more IB courses.

Under Saran's direction, the LWHS IB program recently completed its first five-year self-study and program evaluation, and came out with flying colors.

"It's kind of like a recertification or reauthorization," said Saran. "They want to make sure the IB is being implemented worldwide adhering to the standards that they set forth. The IB is offered in more than 130 countries around the world and thousands of schools so they have to have a uniform system. Once you have an IB diploma, if you apply to any university anywhere in the world there's a certain expectation as to what the student has done in their academic life. They value their brand."

The 60-page self-study took about nine months and required the school to provide documentation that the school is adhering to the organization's best practices. LWHS not only met all the standards, with not a single matter to be addressed, but also received numerous commendations.

IB World Schools Manager Renee Ilhardt commended the school for its "exemplary evaluation" and said for a diploma program to not have any matters that needed correction is a "major accomplishment. It reflects the school and student success in so many areas."

Ilhardt also encouraged Saran and LWHS Principal Donna Dunson to share their good practices with the IB community "to allow others to be inspired by what is going on in your school." Ilhardt said she already is sharing the success of LWHS internally across the IB to alert her colleagues about the expertise the school has to offer others.

Saran shares the Lake Wales story statewide as president of the Florida League of IB Schools. The school currently offers IB classes to 340 students in grades 9-12, served by 21 teachers.

Two of those students are juniors Alexandra Pratt and Isaiah Batson, who are quick to explain why they chose the IB program.

"I decided to do IB because I want to go to medical school and in order to do that this will give me the most amount of credits while still being able to get a real high school experience," Pratt said. "I also felt like it was the best opportunity for me to be able to learn in an environment where people are really motivated."

Pratt said she recognizes some students are in a cycle of poverty or don't want to push themselves, but the school makes sure everyone is heard and encouraged to succeed.

Batson, who plans to become an engineer, agreed the school comes together like a family and he shared similar thoughts about why he chose IB: "The reason I joined IB was to really push myself another mile. It's a place where I think I can really learn and grow as a student and as a scholar, because that's what we are. It's really a rigorous program and it's really good to open your mind to how many cultures and how many other things are in the world."

Saran said the Lake Wales IB program doesn't just serve an elite group of students, but is open to all who are really motivated. He noted some students who have slacked off in middle school or entered high school with low test scores have been given the IB opportunity and achieved success.

"We work the program around whatever level you walk in," Saran said. "It's our responsibility to make sure you graduate from here with the skill set you need. My philosophy for IB at Lake Wales High School is it's meant for each and every student who wants to do it. I don't want to come in anyone's way and say you don't make the cut."

Saran said IB opens doors for many students who didn't think they were smart enough or never thought college was an option. Many of the IB students qualify for prestigious national awards and other scholarships that enable them to afford even expensive private universities. 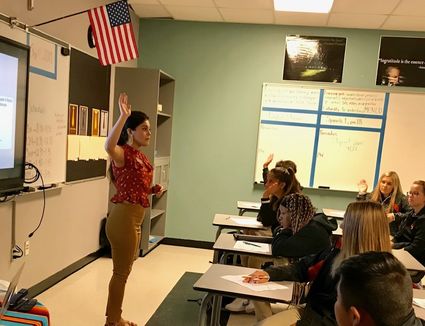 The Lake Wales IB program is grateful to local benefactor Henry McCance, who provides funding for teacher training and many extras the school needs. The school fully funds IB, including fees for testing, so the program is available at no cost to students.

"For students who've grown up on free and reduced lunch (poverty level) all their life and they start out making $70,000 to $80,000 a year, for them it's life changing," Saran said. "I want to see that happen for as many of our students as possible."

- Maintaining reserves devoted to updating and improving the diploma program

- Providing professional development beyond what is required