Reflections of a Full Life 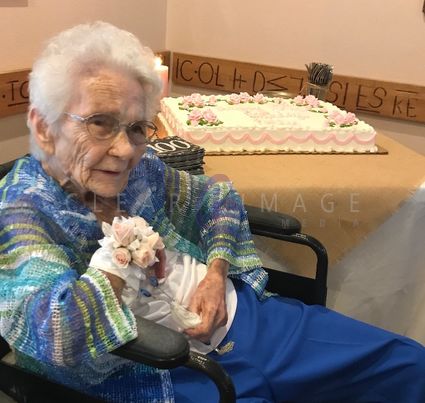 1919, Woodrow Wilson was the 28th President, prohibition had gone into effect, the United States Congress approves the 19th Amendment of the U.S. Constitution, World War I ends, The Florida Keys Hurricane killed 600, and Polly Stephens was born in Sumner, GA on September 18, 1919.

Polly recently turned 100 and her family and friends celebrated at a Lake Wales restaurant. 100 years, 10 decades - however you want to slice it - that is a long time. Businesses, as rare as they are, try to accomplish this task, and for us mortal souls, a rare fete that is lauded as a definite major milestone.

When I sat down with Polly you could sense the Southern charm and manners. Super attentive, a couple of "bless your hearts," and she even asked if I would like some coffee. When you are raised in Southern Georgia and have been in Central Florida your entire life that Southern charm will definitely come out, even when it doesn't have to because you are 100 years old.

Originally, this article was going to be about Polly and all the changes that have taken place in Lake Wales since she originally came. However, there was so much good content, that when a centenarian wants to speak, you listen and take notes.

Polly started life in Sumner, GA. Sumner was incorporated in 1883 by the Georgia General Assembly. It is in southern Georgia and is in Worth County. When Polly was little her family was into farming. Her father owned a plantation and they raised tobacco, corn, cotton, peanuts, watermelon, and cantaloupes. She reminisced about all the farm animals that were supposed to be for work that she rode, sledded behind, or had as pets.

One of her earliest memories was her Nanny always sewing her new doll clothes for her dolls. They would sit on the running boards of the car for hours and play with those babies. I asked her what her best memory of playing with the animals was and she told me that they used to have the goats pull them in the wagon all around town. They would go by her grandparents' building in the center of town. The simplicity of life was astounding back in those days and was only overshadowed by the amount of work that had to be done to produce an adequate life.

One would think that back in those days the children would work on the plantation and prepare to take it over. That was not the case in Polly's family. Her brother went to school to be a doctor and Polly went to school to be a nurse. She left home and attended Georgia State Women's College, now called Valdosta State University. She studied there from 1937-1940. After completing her degree, she then went on to Emory University to complete her degree in nursing. It was during her college days that she met the love of her life, Elmer Stephens, and they began to court. While she was in school finishing her degree her boyfriend, soon to be husband, was serving the U.S. in the South Pacific during World War II. Her thoughts were that she could be useful in the South Pacific, so she went through the process of joining the nursing staff that was going to be shipped off to the South Pacific from the Emory University nursing school. That mission was changed and Polly ended up serving the soldiers while working at the Veterans Hospital in Atlanta. She spoke fondly of those times and how much the soldiers smiled even though they were in a tough spot. The fact that she didn't get shipped off was a good thing in the end.

Elmer returned from the South Pacific in 1946 and they were able to start making plans together. Polly and Elmer met when Elmer came up to work on the plantation during the summer. It truly became the story of falling in love with the farmer's daughter. With the future in front of them they headed down to Florida, to where Elmer was from. Let us all remember that during the early 40s that travel was still heavily done on the train. Many of us forget that there were no interstates, commercial flights still weren't popular, and many roads were still dirt paths.

In 1946, the United Nations had their first meeting in London, the bikini was first modeled in Paris, and It's a Wonderful Life was released. So, on the train they headed to the Orange Bowl in Miami to watch the Miami Hurricanes play the Holy Cross Crusaders. After the game they made their way back to Lake Wales and got married at the old Lake Wales Methodist Church.

After getting married Polly decided that they were going to make their life in Florida and not Georgia, so she gave her two week's notice to the Veteran's Hospital in Atlanta, and they moved to Frostproof. The reason they moved to Frostproof was because they had become part owners in a dairy. Elmer delivered the milk every day and Polly made the butter. She said she enjoyed forming the butter and that her biggest customer was Dr. Dunham. After one year of owning the dairy they sold it and that is when life in Lake Wales began.

Elmer started working with the post office and Polly stayed home to tend to the children. First, they had their daughter Pat, then came Steve (Elmer), and last was Bob. Polly loved that all three of her children were born in Lake Wales and that they grew up in the downtown area.

When they first moved to Lake Wales, they rented a house and then they purchased their family home on 5th Street. While raising the children Polly was active with the Woman's Club and became the president of her Sunday School class at the Methodist Church. She loved working with Mrs. Tillman, so she stayed on at the church for an extended period of time.

During our conversation, which I could have sat with Polly for many hours, we discussed one of her children having Polio. When her son Bob was 15 months old, he was diagnosed with this debilitating disease. The way they found out was that they were on vacation in Georgia and Polly's brother, who was now a practicing pediatrician, diagnosed Bob.

As the rest of the family returned to Florida via train, Polly stayed with Bob for many months while he went through an incredible regimen of therapy. One of the cool asides with his therapy was that he was housed at a hospital and rehab facility in Warm Springs, GA. Warm Springs was famous because that was purchased by President Roosevelt when it was thought that he had polio. The warm waters that came from 3,800 feet below bubbled out at a consistent temperature of 88 degrees. These therapeutic waters were an integral part in Bob's treatment while he was at the facility as well.

Just as a side note: President Roosevelt was diagnosed with polio, but his symptoms were more consistent with Guillain–Barré syndrome. Although there may have been some misdiagnosis with the President there really appeared to be some great benefit to Bob and his recovery. If you see him today, you would never know that as a baby he was diagnosed with this life altering disease. After many months, which bled into another year, Bob was able to leave the Little White House area in Warm Springs and rejoin his family in Lake Wales. 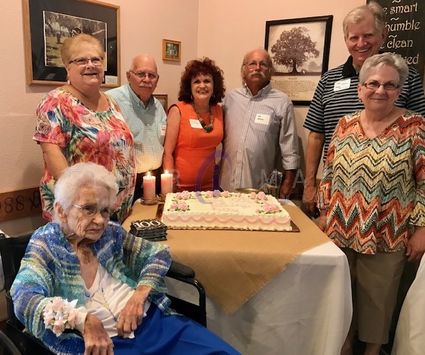 Polly Stephens with her family (l to r) son Elmer and his wife Sandy, son Bob and his wife Diane, daughter Pat and her husband Cary Johnson.

As we continued our journey through her life and Lake Wales I asked if she ever went back into nursing. She lit up and informed me that, yes, she did go back to work and she really enjoyed it. She served as the chief nurse for the Lake Wales Convalescent Center. I asked her what it was like to work with the soldiers coming back from war and then the patients towards the backside of their lives. She smiled and told me that the soldiers talked about their futures, even when they were missing limbs or other things, and the those convalescing many times just fussed about where they were. She said she loved all her patients but felt so excited when a soldier would be released from her care.

Please do me a favor; go out and speak to someone that knows what WWII is, not just as a story on the internet, and see what they have to say. It is amazing what they have to say, what we may learn from them, and the knowledge that really wants to come out to a truly interested party.