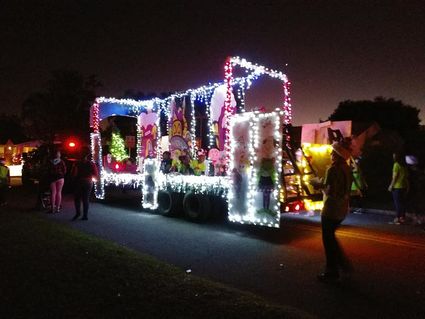 Thousands lined Central Avenue to enjoy the band, floats, cars and other festively lit entries in the nighttime event, sponsored by the Kiwanis Club of Lake Wales.

Walkers passed out candy, and costumed elves interacted with fascinated children. Studio 6 Academy of Dance won the President's Choice Award for best float, with its Whoville float complete with Grinch and dancers dressed in lime green.

Lake Wales High School color guard led the parade while the bands played Christmas carols. Many floats decorated to support the theme, "Young at Heart" while others promoted the meaning of Christmas with manger scenes and other reminders of the reason for the season. 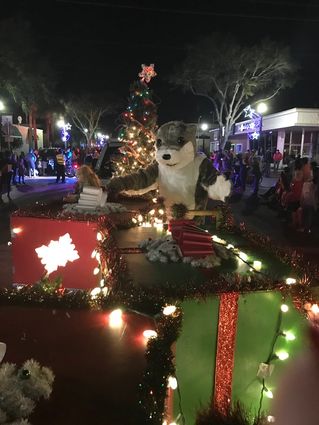 Josh the Otter, a promoter of water safety for children, waves from Rotary on the Ridge float

An adult-sized Josh the Baby Otter, who promotes water safety in programs conducted by Rotary on the Ridge, waved from the club's float, which was decorated with Christmas trees, a fireplace and giant packages containing children dressed as toys.

Rhoda's Rentals in Auburndale caused some chuckles as Santa and other blow up creatures peaked out of portable restrooms on their float. Ronald McDonald rode a scooter, police did twists and turns on motorcycles and flyers followed the Aviator PPG float on hoverboards. The Lake Wales Pram Fleet float featured one of its sailboats atop a sea of blue lights.

Sheriff Grady Judd and some of his employees waved from a brightly lit sheriff's office float. The parade ended with the tradition of Santa Claus arriving by fire truck.