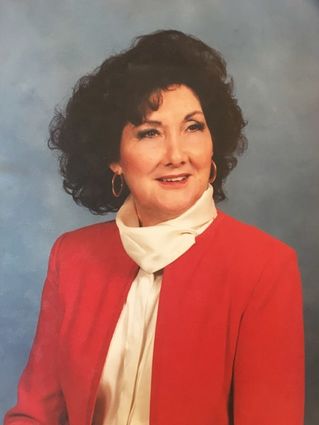 In her adopted hometown and beyond, Mimi will be remembered as the founder and director of the Depot Museum, host of the annual Pioneer Days festival, red outfits and patriotic costumes, and a tenacity for her endeavors. Over the course of her career, she raised millions of dollars for historic preservation and cultural and recreational projects throughout Lake Wales. Mimi's biggest supporter was her late husband, William M. Hardman, M.D., native son of Lake Wales and obstetrician/gynecologist, who delivered more than 5,500 babies during his 51-year career. He preceded her in death in 2010.

Mimi was born at home in Reidland, KY June 25, 1934 to John Randolph Reid, Jr. and Opal Moran Reid. She attended Paducah Tilghman High School and was graduated from Mayfield High School in 1952. Mimi was a synchronized swimmer in high school and college, and once swam across the Ohio River. She attended Paducah Junior College, graduating in 1954. At Murray State University, she was cheerleading captain and crowned Miss Murray State in 1955. Mimi earned her bachelor's degree in Biology and Chemistry, and her master's degree in Medical Technology from Emory University in Atlanta in 1958. While at Emory, Mimi began dating medical student Bill Hardman, a University of Florida alumnus from Lake Wales.

Bill and Mimi were married in Paducah, KY in 1958. They lived in Greenville, SC and Charlotte, NC, where Dr. Hardman completed his medical internship and residencies in Obstetrics and Gynecology. In Charlotte, their eldest children, Kelly and Bill, Jr., were born in 1961 and 1963, respectively. The story goes that Dr. Hardman told his bride, "You love me, you love Lake Wales." After serving at the U.S. Naval Hospital in Key West, Bill and Mimi returned to his hometown in 1965 and Bill setup a private practice. Their son Reid was born in 1970.

Mimi embarked on a lifelong commitment to the community and to historic preservation. In her first years in Lake Wales, she served as a teacher in Polk County Public Schools, a Girl Scout troop leader, and an American Red Cross water Safety Instructor and Lifeguard. As owners and restorers of The Arcade building in the city's historic downtown, the Hardmans were among a group of civic leaders who were the catalyst for redevelopment, triggering a surge of revitalization in the heart of the city.

Mimi was appointed by the Lake Wales City Commission as chair of the Bicentennial Committee in 1974. The idea of a history museum emerged, and she convinced the CSX Corporation to donate their abandoned 1928 Atlantic Coast Line railroad depot to the city. She spearheaded the effort to restore and convert the pink depot into the city's first museum with a mission to preserve, safeguard, and share the historical records of the life, people, and places of Lake Wales. The museum was dedicated July 4, 1976 as part of the American Revolution Bicentennial celebration and is now known as the Lake Wales History Museum. Among its historic buildings and train cars, the museum hosts a collection of regionally significant printed materials, illustrated items, manuscripts, textiles, and artifacts.

Mimi created and oversaw the first Pioneer Day in 1976. For her efforts, she was named Citizen of the Year in 1977 by the Chamber of Commerce. Pioneer Day became an annual celebration of Lake Wales' early settlers, which she hosted in period attire. Each year, a longtime resident who has greatly contributed to the community is honored as the Pioneer of the Year. Over the years, the event grew into a two-day affair attracting thousands of people. For the 30th annual Pioneer Days, Mimi was recognized as an Honorary Pioneer. She was selected as Pioneer of the Year in 2016. Now in their fifth decade, the museum and Pioneer Days continue as Central Florida attractions.

Mimi was appointed the executive director of the museum and chairperson of the city's Depot Commission in January of 1980. She became the driving force for the collection of historic materials, the preservation of other historic buildings, fundraising for projects and events, and spokesperson for the promotion of arts, culture, and heritage throughout the city. As a full-time volunteer, Mimi was paid a ceremonial one dollar a year.

In 1987, the Historic Lake Wales Society was formed with a mission to preserve and share the history of Lake Wales. A long-range plan was written, and it was proposed the museum implement a city photographic archive, work with local universities, and develop relationships with other historical associations throughout the state, all of which were endeavored by the museum through Mimi's leadership. She was president of the Society until 2015. She also established and was a member of the Lake Wales Historic Preservation Board since its creation in 2002.

Beyond her focus on the museum, Mimi worked tirelessly to list a host of buildings on the National Register of Historic Places. These included structures on the old high school property and the old City Hall. Through her leadership in the 1990s, the School Board of Polk County donated the 9-acre high school property to the city. State grants were used to create a recreational and community complex, which included restoration of the Kirkland Gymnasium, the Boys & Girls Club in the old primary school, and portions of the 1919 school building named in her honor (Hardman Hall). In the heart of downtown, the old City Hall was restored and re-dedicated as the J.D. Alexander Center at Polk State College. Lake Wales now boasts three historic districts with a collection of historically significant buildings.

Mimi's efforts and projects in historic preservation were statewide. She was appointed by Governor Martinez to the Division of Cultural Affairs' Florida Council on Arts and Culture. She served on the board of the Florida Trust for Historic Preservation and, for more than a decade, served on the Florida Historical Commission under the appointments of Governors Bush, Crist, and Scott. She spent hundreds of hours each year in Tallahassee for Preservation Day, chairing survey and planning grants panels, and lobbying for grant funds through the Division of Historic Resources.

Mimi's community interests extended also into public education. She served on the Polk Education Foundation and a state Blue Ribbon Commission on Education. She served as chairman of the Polk County School Advisory Council from 1985-1989. In Lake Wales, she helped streamline the elementary schools into the K-5 model, which remains in use today.

Another of Mimi's community passions was the Lake Wales Rails-to-Trails project. In 1989, the city acquired the former Seaboard Air Line rail bed as a utility corridor. A grant was secured to convert it into a two-mile walking and biking trail. However, the Lake Wales City Commission voted to return the grant and abandon the project. Mimi supported a citizen initiative to get the issue on the ballot, where it was approved by voters. The paved trail was completed in 2010. She served on the City's Bicycle and Pedestrian Advisory Board from 2005-2014.

Mimi was on the local board that preserved State Road 17 and designated it a Florida Scenic Highway. She was a vocal supporter of the Ridge Scenic Highway Corridor Management Entity and active in establishing the 39-Mile Yard Sale along its route.

A complete list of Mimi's awards for fundraising, community involvement, and accomplishments numbers several pages. Other highlights include decades of service as the event manager for the Polk Senior Games; Community Redevelopment Agency board member; Main Street board member; first female member of the Rotary Club of Lake Wales; and memberships in the Daughters of the American Revolution and the American Association of University Women.

Mimi is survived by her daughter Kelly (Steve) Parker of Naples and their children Reid, William, and Elizabeth Leigh; William M. (Bill) Hardman, Jr. (Jodie) of Orlando and their children Wm. Miller, III and Anderson Leigh; Reid (Molly) Hardman of Lake Wales and their children Mary Leigh and Streaty; and sisters Sue Reid Draper of Paducah, Kentucky, and Johnna Reid Patterson of Treasure Island, Florida; and many nieces, nephews and cousins.

Mimi Hardman dedicated her life to the preservation of Lake Wales history and heritage. She was the founder and 40-year Executive Director of the Lake Wales History Museum (formerly the Depot Museum and Cultural Center), and champion for historic preservation throughout Florida. In her honor, the City of Lake Wales has committed $50,000 to renovate the historic 1916 Seaboard Airline yellow depot and re-dedicate it as the Mimi Hardman Collections & Research Center. Citizens have set a goal to raise an additional $75,000 through private donations. There is great demand for the effort as the city's collection of historic memorabilia includes more than 20,000 items, some of which date to the 1850s. Upon the complete restoration of the 1916 Depot, a large community celebration will be held at the Museum campus to dedicate the Mimi Hardman Collections and Research Center. The public will be invited.

A memorial service for Mrs. Hardman will be held on Monday, Jan. 13, 2020, beginning at 2 p.m. at the First United Methodist Church of Lake Wales, where she was a member for 55 years. Pastor Jeff Kantz will officiate.

Remembering Mimi and her life well-spent in service to her community, it is suggested that those attending her memorial service wear the colors for which she was best known-Red-or the Red, White, and Blue of our American flag: a patriotic lapel pin, necktie, hat or scarf.