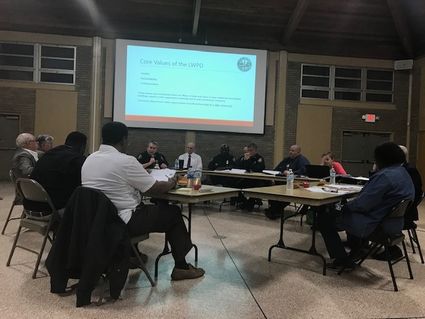 At the end of a tense, 3 ½ hour city commission workshop on community policing and the prospect of police wearing body cameras Lake Wales City Manager Ken Fields summarized his marching orders: Bring back a plan and budget for implementing body cameras and develop a better system for citizen complaints.

Police Chief Chris Velasquez made a lengthy and detailed presentation citing his department's service-based community policing philosophy and commitment to building trusting relationships. He talked about the strict vetting process for new hires and the ongoing training officers receive. He noted that the department, with its 44 sworn officers, received only 10 citizen complaints against police in 2019, only two of which resulted in corrective action.

But two hours into the workshop when they finally got to speak the mostly African American audience described intimidation, racial slurs, brutal arrests, planted evidence and other alleged police actions they said caused them to lose trust and made them afraid to come forward with complaints. They pointed out that when someone comes to the police department to report officer misconduct they are told if the complaint is determined to be unfounded they will be arrested for filing a false report. One-by-one the audience members passionately pleaded for police body cameras.

Commissioners Terrye Howell and Curtis Gibson came out strongly in support of body cameras, saying they were important for accountability and actually would protect police from frivolous complaints. Commissioner Al Goldstein said he would vote "no." Deputy Mayor-Commissioner Robin Gibson said he wanted a full analysis with costs. At the end of the public discussion, Mayor Gene Fultz said he had heard the strong citizen support for body cameras and wanted them included in the upcoming budget. Fultz called for unity and better communication to help heal the evident and growing divide.

The workshop stemmed from a request for commission action by local attorney Sara Jones, president of the newly formed Lincoln Community Development Corporation, who said the northwest community wanted more police training, better community policing and for officers to wear body cameras. When the mayor tried to cut Jones off after five minutes, Howell angrily lashed out at the city manager for not including Jones as a full workshop participant and said he ultimately would be held accountable if any "bad apples" in the police department weren't removed. She questioned why police quit using body, car and taser cameras a few years ago without notifying commissioners, who had approved and funded their purchase. Fields also took hits from a couple of the speakers, who said he was never seen in the northwest community and didn't participate in important events like the recent Martin Luther King Jr. Day activities.

Jones said there was no need to "reinvent the wheel," that the U.S. Department of Justice and various law enforcement agencies could provide support and lessons learned about implementing body cameras, which are needed now because "there is a trust problem in the city."

Jones brought with her Jill Tuman, a private investigator for Prison Break Investigations, a firm that helps prepare defenses in criminal cases, especially for indigent suspects. In her five-plus minutes Tuman read a long list of complaints against Lake Wales police, including allegations of false arrests, brutality and intimidation. She said she was speaking for many clients because "people are afraid of retaliation."

"Without trust in our criminal justice system, that system will fail," Dimmig said. "Perception is reality. If the people of Lake Wales don't perceive justice, there isn't justice."

Fields pointed out that citizens who don't want to file complaints at the police department can go through the city's Human Resources office. By the end of the meeting he acknowledged the need for an easier and more citizen friendly way for complaints to be submitted.

Goldstein, who is in his first year as a commissioner, invited the audience to call him with any concerns, offering business cards so they knew how to reach him.

Northwest community leader Narvell Peterson, a retired law officer, said the community didn't yet know Goldstein and felt more comfortable talking to people who "look like them." He detailed an incident where he believed his grandson was the victim of police profiling and said body cameras would eliminate "he said-he said" and help get to the truth.

The Rev. J.J. Pierce of First Institutional Missionary Baptist Church said he had seen improvements in police-community relations in recent years but "It is evident there seems to be a breakdown in communications."

Pastor Walter Nelson of IMPACT Church said spiritual problems needed spiritual solutions, calling for people to join him in prayer for the city after the meeting.