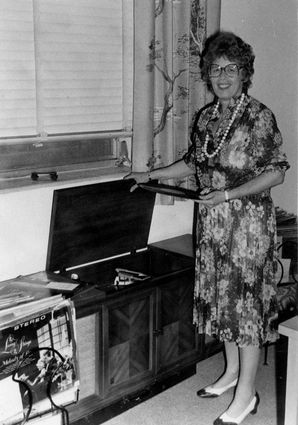 From the bottom of our hearts, we are so sad. Fran was an amazing public servant. She was the library staff member who knew what a child needed.

There were no....Accelerated Readers, no Sunshine State Young Readers, no Best of Lists....she loved her library children and made sure they were guided to the books they'd most love, grade level appropriate or not.

Obituary - Frances B. Prescott, age 97, passed away peacefully at Palm Garden in Gainesville, Florida on April 26, 2020. Frances was born in Detroit, Michigan, and graduated from Holly High School. In August 1943, Frances traveled by train to Santa Fe, New Mexico and married her high school sweetheart, U.S. Army Cpl. Jesse A. Prescott, who was stationed at Los Alamos. In October 1944, Frances traveled by troop train with her infant son back to Michigan, where she lived with family until Jesse's return from overseas. In 1953, they moved to Lake Wales, Florida where Frances was a library staff member at the Lake Wales Public Library for over 30 years. She began her career reading story books to children. Many may remember Mrs. Prescott for instilling in her young readers a lifelong joy of books.

The current Director of Library and Historical Resources, Tina Peak's mother remembers her three children at Mrs. Prescott's desk, barely able to see her over the desk top, anxious to hear what her next recommendation was for them to read. Tina was blessed to spend an afternoon with one of her mentors, Fran Prescott, in July 2019 on a visit to Gainesville.

In 2013, Frances moved to Gainesville to be near her children. She was preceded in death by her husband of 54 years, Jesse Allen Prescott, Jr. and her sister Ruth W. Filkins. She is survived by her son, Capt. Jesse A. Prescott III, USN (ret.)(Kathleen), and her daughter Carrie Prescott Fagan (H.L. 'Buddy'), five grandchildren, and 12 great grandchildren. A family memorial will be held at a later date.

From Library Director, Tina Peak, "I considered Fran one of my three mentors. My mom, who took my brothers and me to the LWPL in the early 1960s forward, Virginia Lassiter, the most amazing professional librarian who ever asked me the hard questions and made me a better librarian... and my precious co-worker, Fran Prescott."

Thank you, Mrs. Prescott, for introducing LW children to Madeline, Dr. Seuss, Ferdinand the Bull and Mike Mulligan and His Steam Shovel."

What a lady, what a sense of humor and style. We love you. May you know what you meant to us.