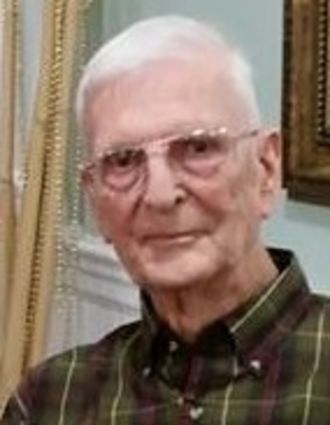 Bob was born May 3, 1926. He was a gentle man who treasured everyone and every moment.

A humble baseball loving kid who liked cars, he grew up too fast. Leaving high school to join the Marines, his 19th birthday was during a literal life and death battle against the Japanese, where he earned the Purple Heart. That experience shaped his next 75 years. When he returned to the states, he finished his high school diploma and earned a college degree.

Gratitude, integrity and responsibility. Although his generation rarely discussed feelings, he showed his love through actions. First and foremost, to Shirley, his wife of almost 70 years and to their five children, each who made him ever so proud, even though they each challenged his calm demeanor more than once.

Many remember Bob as the owner of Geneseo's Bob Waring Chevrolet & Oldsmobile agency for 30 years. Others knew him as the cowboy hat-wearing school bus driver for 20 years, or "Bob," who ran the media lunch room for the Cleveland Indians during spring training for 15 years.

"Service above self" was integral to his life. When most might say "Someone should do something about that," Bob Waring did.

A Rotarian for more than 50 years, he was club president and awarded the Paul Harris Fellow. Boy Scouts awarded him the Silver Beaver for decades of service.

Free Masons was important to him and he to them, where he was lodge master and earned honors.

He served as member and often leader of the PTA, Historical Society, St. Michael's Church (Geneseo), The Church of the Good Shepherd (Lake Wales), NY Auto Dealer Association and many other activities.

He was predeceased by his wife, Shirley; brothers, Richard and Thomas; sisters, Mary, Ruth and Virginia; and son-in-law, Peter DiNardo.

A memorial service will be held at a later date at St. Michael's Episcopal Church, 23 Main St., Geneseo.

In lieu of flowers, memorial donations may be made to Oxford Veteran's Home, Activities and Pet Project Fund, 4207 State Highway 220, Oxford, NY 13830.