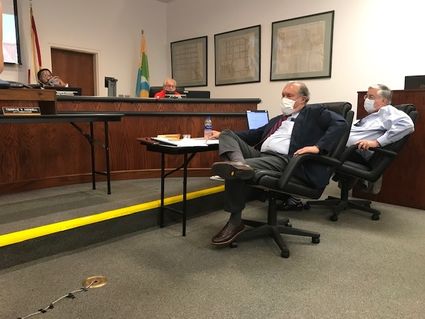 Lake Wales City Manager Ken Fields and the city commission agreed Tuesday June 2 to part ways in something akin to an "amicable divorce" but it took a lengthy discussion to reach agreement on the terms for the split.

"I hope I am viewed as someone who has made Lake Wales a better city," Fields said, noting leaving two years before his contract expired wasn't his choice but he was resigned that it was time to go.

Fields' departure was effective immediately, but everyone made clear he was not fired and that all parties had come to a mutual agreement.

"I'm looking at this as a very amicable way to go," said Mayor Gene Fultz. "People have said they want the city manager gone. I'm not fighting that."

To keep the peace and avoid a potential lawsuit, commissioners agreed to give Fields a $26,800 "good will" parting gift, the equivalent of 10 weeks' pay. He also will receive 10 weeks of paid leave so he can postpone his official retirement until Aug. 9, when he will have completed seven full years of service. During that time he will remain living in Lake Wales and make himself available if city officials need to consult with him on any city matters. Had he been fired without cause Fields would have been owed 45 days of paid leave plus a 20-week severance payment of $53,600, so the agreement saved the city money and the potential blemish to its reputation.

It took a while, but Fields ultimately got everything he requested, including the ability to buy into the city's general pension plan without completing the normally required 10 years' service. Commissioners approved a special exception that will allow Fields, 73, to buy up to five years of past government service in order to obtain a lifetime city pension. When he was hired in 2013 Fields opted out of the city's general pension plan and instead chose to invest in a 401(A) retirement plan and a 457 deferred compensation plan, into which the city contributed more than $175,000. To buy in will cost him something upwards of $300,000 but there will be no cost to the city.

Commissioner Terrye Howell reluctantly agreed to the settlement, saying that while she would have preferred terminating Fields for cause she would join her colleagues in doing what they believed was best for the city.

Deputy Mayor Robin Gibson, who surprised commissioners two weeks ago by suggesting he wanted the city manager to take an early retirement, said he wanted to "head off controversy" and move forward with hiring a city manager who could help implement the city's downtown redevelopment initiative from the ground up. A workshop is scheduled July 9 to unveil the engineering consultant's initial design ideas.

Commissioners named Deputy City Manager James Slaton to serve as interim city manager while they determine how to proceed with naming a permanent replacement. The deputy mayor suggested commissioners consider naming an interim who agreed not to apply for the job, but the rest of the commission didn't agree. Mayor Eugene Fultz said the city likely couldn't find anyone as qualified as Slaton and both Commissioners Terrye Howell and Curtis Gibson expressed strong support. Commissioner Al Goldstein said he is very impressed with Slaton but wanted to keep options open in case a "Supergirl" showed up.

Fields has lived and worked in Florida for close to 20 years and previously served as manager or assistant manager for the city of Hollywood, Islamorada, Village of Islands in the Keys and the Seminole Tribe of Florida. His tenure in Lake Wales was the longest of his career. 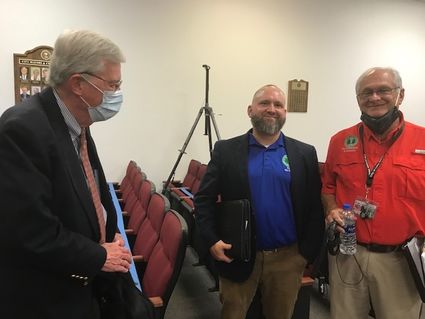 A common complaint against Fields was his cool demeanor and lack of visibility in the community, but he had strong support from the Lake Wales Area Chamber of Commerce and Economic Development Council, which named him their 2019 Public Servant of the Year.

In the past year he has had a few dust ups with Howell and both Gibsons, leaving city observers to question whether he would stay until his contract expired in August 2022. When the deputy mayor proposed early retirement, even Fields' strongest supporters recognized his time in Lake Wales was drawing to a close.

Lake Wales Deputy City Manager James Slaton has been preparing for the city’s top job for a long time. City commissioners at their June 2 meeting decided to give him the opportunity to take the reins, naming him interim city manager to replace Ken Fields, effective immediately.

Slaton has worked for the city for 17 years in various capacities, currently oversees nine departments and takes an active role in the preparation of the city’s annual budget and capital improvement project plan.

In October he completed an intensive two-year leadership program conducted by the International City Managers Association designed to prepare graduates to be effective leaders in all areas of local government management.

Commissioners at a future meeting will discuss how they want to proceed with selecting a permanent replacement for Fields. Slaton is expected to be a strong candidate and Mayor Eugene Fultz said the city will be hard-pressed to find someone more qualified.

Slaton, 43, started work in Lake Wales in 2003 on a contract basis in Information Technology, helping administer the city’s computer network. Two years later he was hired to become the city’s director of information technology and network administrator.

Slaton has an associate’s degree in computer network engineering and a bachelor’s degree in public administration supervision and management from Polk State College. He is working toward completion of his master’s in management and leadership from Western Governor’s University. He completed the Senior Executive Institute at the Weldon Cooper Center for Public Service at the University of Virginia