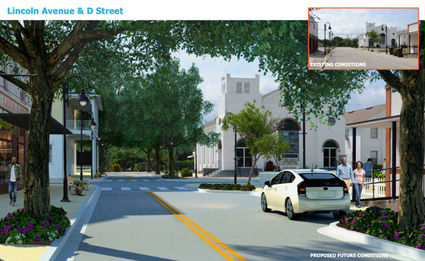 This is the seventh installment in the Lake Wales Renaissance series. Lake Wales City Commissioner Robin Gibson serves as Deputy Mayor and Chairman of the city's Community Redevelopment Agency.

The Dover-Kohl plan is much more than an update of the well-worn 1973 improvements to Downtown. The plan covers the town's historic core. It is thorough, comprehensive, and doable. The entire plan can be viewed at: https://www.doverkohl.com/lakewales.

Appropriately named "Lake Wales Connected," the Plan values the Northwest Neighborhood as an integral part of the historic core, "connecting" it to Downtown and thereafter to the public facilities in the Crystal Lake and Lake Wailes Park areas.

Neighborhood Status. Revitalization of the Northwest is every bit, if not more, of a challenge than the revitalization of Downtown. In the days of segregation, the Neighborhood's families and friends lived in the same area, supported each other, and found most of what they needed in locally-owned Neighborhood businesses. As integration took hold, the locals drifted off to patronize businesses outside the Neighborhood. Later on, higher education led to stronger incomes and some locals left to live elsewhere in town or moved out of town to find better opportunities for growth. The result is that the Neighborhood --- so rich with multi-generational history --- finds itself today with hardly any businesses on Lincoln Avenue and with residential areas marked by vacant lots caused by demolished structures.

Enter Dover-Kohl. The firm fully immersed itself in Lake Wales history and thereafter worked long hours with Lake Wales citizens from all parts of town. The result is now known as the Lake Wales Connected Plan. The Plan first calls for the construction of a prototype street design in Downtown on Park Avenue from Scenic Highway west to Wetmore Street. Based on what is learned in that project, the next step is to better connect the Northwest Neighborhood to Downtown. First Street will be redesigned --- with street trees and landscaping, a cycle track, and right-sized vehicle lanes. It will extend from Dr. J.A. Wiltshire Avenue in the Northwest Neighborhood all the way to Central Avenue. On the way to Central, First Street will form an intersection with the improved Park Avenue in Downtown.

Strengthening the Neighborhood. Ironically, planners are today attempting to avoid the consequences of urban sprawl by designing "mixed use" communities --- just the kind of community the Northwest Neighborhood has been all along.

urban sprawl is characterized by a wide expanse of single use structures, usually residences. As a result the inhabitants can't conveniently find what they need and have to get in the car to go get a tube of toothpaste. A mixed use community blends residential, commercial, cultural, institutional, or entertainment uses into one area. Ideally, residents are able to access those activities as pedestrians, rather than by automobile. As many of the needs of neighbors are met within the neighborhood, the residents experience the benefits of convenience, savings in time and transportation costs, and have a better opportunity to interact with each other on a human scale. It's heartwarming to hear the old-timers in the Northwest Neighborhood reminisce about the good times and strong relationships they experienced with their neighbors in such a setting. 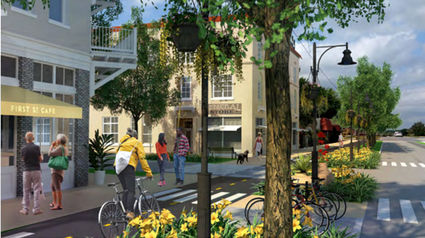 Artist rendering of revitalized First Street, the connector between downtown and the Northwest community.

The Lake Wales Connected Plan calls for a mix of uses, thereby setting up the structure for strengthening the Neighborhood once again. The "Implementation" segment (pp. 76-85) contains an Action Plan for the town's historic core, consisting of 69 action items arranged by sequence and priority. Thirty of the 43 near-term actions, 14 of the 20 mid-term actions, and three of the six longer-term actions involve steps to improve and enhance the Northwest Neighborhood.

The Lake Wales Connected Plan is a huge undertaking. Our work is cut out for us. Most of the elements of the community will need to work together in a unified effort to pull it off. We have the capacity to make it happen. The result will be well worth it.

The Next Installment: The Private Sector Component