Commissioner Questions Expenditures of City Funds by Outside Groups 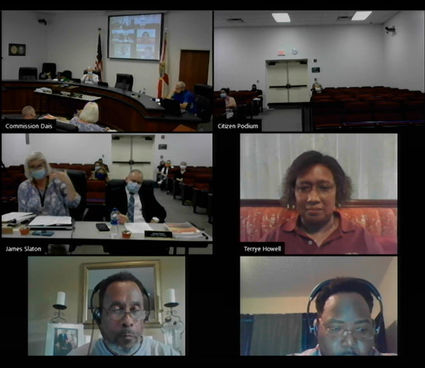 Lake Wales City Commissioners got good news at their second budget workshop Aug. 12. Despite the COVID-19 pandemic's negative impact on the economy, projected state revenue is about $100,000 higher than originally expected.

Budget Director Dorothy Abbott said she is confident that the City can adopt a balanced budget at a slightly lower "rollback" millage, the rate that is expected to generate the same amount of property taxes as this year. The current rate of 6.9339 may be reduced to 6.7974, or slightly less than $6.80 per $1,000 of taxable property value. Abbott said the city also will be able to maintain a comfortable reserve of 15 to 20 percent of the budget.

Abbott said receipt of state funds lags only about a month behind and city officials track revenue received versus the budget. Halfway through the budget year, which begins Oct. 1, the city manager will bring any needed budget amendments for commission consideration.

Deputy Mayor Robin Gibson expressed optimism that the economy will improve, noting federal pandemic expert Dr. Anthony Fauci has predicted a COVID-19 vaccine should be available by the end of 2020 or early 2021.

Commissioner Terrye Howell said the city needs to keep a healthy reserve for unexpected expenses, such as the impact of a hurricane.

"I just want to make sure we have money in that reserve when we need it – so we don't have to cut staff," Howell said. "It's a reserve, that's why you put the money aside, dig a hole in the back yard," noting she doesn't want Interim City Manager James Slaton "to have to figure out how to keep the departments intact, keep our people working."

Slaton said he did want the commission to plan for "worst case scenario." The proposed budget includes about $1 million in spending cuts and a reduction of 3.4 staff.

Commissioner Curtis Gibson said he wanted city departments to avoid any unnecessary spending or postpone purchases that won't impact city services. He also said commissioners should consider cutting external contracts by at least 10 percent and taking a closer look at how city dollars are spent by outside organizations. The city usually makes an annual grant to the B Street Community Center and contracts for services from the Lake Wales Little League, Boys and Girls Club, YMCA, the Chamber of Commerce and Lake Wales Main Street. Kieft said after the meeting that he understands the revenue concerns due to COVID-19 and that he will adjust his budget accordingly if the city calls for a 10 percent cut.

"I also believe it is time to review all of our external contracts to ensure the best return on investment and that there is full accountability and reporting on expenditure of city funds," Commissioner Gibson said. "I believe every organization that receives city money should submit a budget in advance and a full accounting of how the money is spent."

While noting he had requested copies of all external contracts, Gibson singled out the Lake Wales Chamber of Commerce, which the city pays $125,000 to $140,000 annually for economic development services.

Gibson said he had discussed his concerns with Chamber/EDC President Kevin Kieft and expected future compliance with the city contract, which calls for annual reports to the commission detailing how city funds are spent, separate accounts for city and private funds and using only private funds for chamber client and member services.

"Are we to believe that only 6 percent of the president's time is spent providing chamber services?" Gibson asked. "If this is truly a partnership, I believe the Chamber should be picking up a larger share of its president's costs."

Gibson called for a reduction of the Chamber's fourth quarter payment, noting the office had been closed for four months and no EDC updates had been put onto the Chamber website since October 2019.

"As more money has gone toward the president, city funds spent on such things as advertising, site selection, travel and meetings have been reduced. I also would be interested in more detail about what the $4,500 the city is charged for overhead is paying for," Gibson said.

Slaton, who took over as interim city manager June 3, said he is taking a close look at all external contracts and will ensure full compliance in the future.

Kieft said he will make sure the city gets what they want and going forward will work with them on how they want it structured.

"We have delivered on the activities to bring jobs, developments, and new companies to Lake Wales and will continue to work hard to continue to make that happen and work as a team to make it happen," Kieft said.