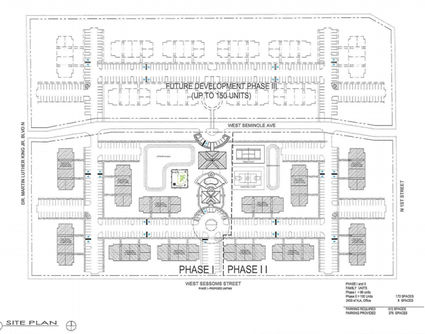 EDITOR'S NOTE: This story was updated by Executive Editor Chevon Baccus after the Sept. 16 CRA meeting.

Pantheon Development, which in 2018 formed a partnership with the Lake Wales Housing Authority to do the work, requested the money from the city's Community Redevelopment Agency as part of a plan to help finance the construction of six "garden style" residential apartment buildings containing a total of 86 new one-, two- and three-bedroom apartments.

In a letter to the CRA board, which is made up of the five sitting city commissioners, Pantheon asked for the award to either be a "soft pay" loan or grant. The $460,000 would not be paid out until the end of the construction, currently projected to be in the fourth quarter of 2023.

According to Darren Smith, a managing member of Pantheon, the city's contribution could be key in helping the project qualify for a Florida Housing Finance Corporation 9% low-income housing tax credit. The tax credit is then "sold" to an investor – almost always a bank or insurance company – for cash. Smith estimated in the case of Grove Manor, it would equate to about $15.6 million towards the total project price tag of $20.7 million.

Getting the tax credit isn't easy, however. According to Smith, the FHFC receives about 200 applications for the program each year, and selects just 10 to 12 annually. However, if the city were to contribute, it dramatically improves the chances for the project to be picked, he said.

Last year, only 24 such applications included a local funding component, with four of the 24 being selected, Smith said. The housing authority is donating the land for the project, officials added.

Commissioners, meeting as the CRA board, agreed to support help fund the project after receiving assurances from Pantheon and Lake Wales Housing Authority Director Albert Kirkland that the project would adhere to design principles outlined in the city's Lake Wales Connected plan, specifically outlined in a memo from Dover Kohl principal Victor Dover.

"Design is a big deal. We're trying to upgrade the quality of housing and the values and the desirability of that housing for the people who live there," Gibson said. "Aesthetics convert to value. We want to work with you on that. We're trying to do that throughout the entire town and we want Grove Manor to be part of the program."

Smith said they would work closely with city officials to follow the Dover-Kohl vision as much as possible.

"We're going to work with the city to make sure that the aesthetics coincide with what you want to see throughout the entire downtown, so there's continuity." Smith said. "We're in the business of creating affordable housing that looks like market rate housing. We don't want to have a very, very dense site. It's garden style walk ups. It's going to look similar to what the Dover Kohl aesthetic has."

"We've been working on this for quite some time, even before Dover Kohl. When it came up, we took a look at it and decided how can we work within what the city's vision is. We want this to be a partnership and a vision of the housing authority and the city," Kirkland noted. "We understand what revitalization is. If we can be that first part to bring this all together, that's great. We'd love to be the first to get the first project done; Dover Kohl is a big project. Hopefully we can bring something wonderful to this area of the community."

Rents for the new units will range from 30 to 80 percent of the area's median income.

"This development will be built to market rate standards with high quality features and finishes such as solid surface flooring throughout the units, stone countertops, energy efficient appliances and bathroom fixtures, high quality window coverings, ample parking, and pristine landscaping," Smith wrote in a letter supplied to the board. "The community will (also) include a central laundry facility, and a multipurpose community room for resident programs and activities such as employment assistance, financial assistance, and adult literacy training."

Interim City Manager James Slaton said the CRA could possibly use funds from the sale of the former Longleaf Business Park. That money – just under $1 million – is not presently earmarked for any specific project, he indicated. Right now the CRA generates about $2.2 million each year in revenue which must be spent within the CRA boundaries on redevelopment and revitalization projects.