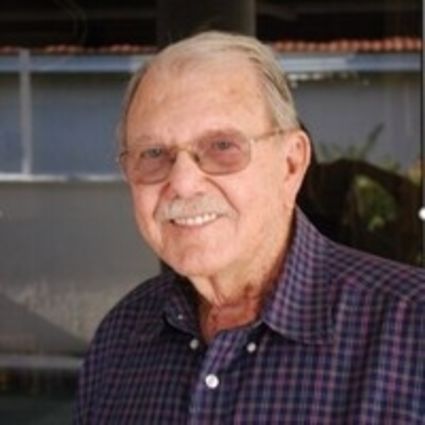 He was born in Lawrenceburg, TN on October 19, 1925 and lived a very full and active life. He will always be known for his magnificent artwork of Florida landscapes, nearly 1,000 originals, and his murals throughout Polk County in Lake Wales, Frostproof, and Lake Placid. Those who knew him personally, remember him as a storyteller, philanthropist, poet, and friend to all.

Tom spent his early years and many adventures on his family farm in Alabama, moving to Frostproof in 1942 where he attended Frostproof High School until being drafted to serve in WWII.

He served in the U.S. Navy from October 1943 to January 1946 on the USS Abercrombie DE343 as a radar technician. Serving in the Pacific Theater, Tom's destroyer protected the USS Missouri during the Japanese surrender. His love of art began at age 18 while in the service, spending off time sketching battleships, often used in the captain's reports, and portraits of his crew's loved ones back home.

Moving to Lake Wales in 1958, he quickly became an entrepreneur and owned several businesses, most notably Freeman's Art and Frame Shop downtown. He was a member of Rotary International and a 60-year member of the Lake Wales Masonic Lodge #242 where he was elected Worshipful Master in 1967. Tom was also an art teacher at Lake Wales High School, Dean of Students and eventually Assistant Principal before his retirement from LWHS in the late 1980s.

Tom never truly retired as he continued to paint landscapes, murals, and portraits. His work can be seen in personal collections and in many businesses throughout Polk County, including in the halls of the Dr. H. Darel Darby building at Warner University. With his dear friend, Marcia Pennington, Tom authored a book "Tom Freeman's Florida", highlighting the 67 counties in Florida with his stories, poems, and artwork, as well as, completed two murals at AdventHealth Lake Wales, featuring Bok Tower and the Lake Wales Art Center.

His memorial service will be held at 2 p.m. Friday, Oct. 9 at the First Presbyterian Church of Lake Wales. Streamed or recorded video will be available of the service. Condolences can be left for the family at http://www.marionnelsonfuneralhome.com/

In lieu of flowers, the family is requesting donations be made to the GARY FREEMAN MEMORIAL SCIENCE SCHOLARSHIP at Polk State College. Donations can be made at http://www.foundation.polk.edu/ or mailed to: